Home > 2014 > May
Want a Better Devotional Life? Buy a Bird FeederWhat my grandfather and my son taught me about patience, love, and a gentle spirit. 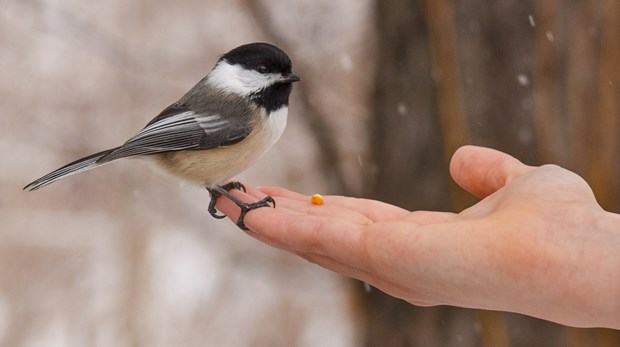 I asked my mother for a bird feeder for my birthday. I'm not sure what inspired my request. Unlike her, I've never been much of a naturalist. My one attempt at a vegetable garden failed. I often need someone else to point out the beauty around me because I find myself lost in an abstract world of words and ideas instead of the sunset or the rainstorm or the field of daffodils before my eyes. These days, I even rely on my 5-year-old son, my mother's protégé, to tell me the names of the trees we pass. ("That's a sycamore, Mom. You can tell by the bark.").

But I asked for a bird feeder, and my mother gladly complied with my request. In early April the birds began to flutter outside our kitchen window. William, the protégé, spent most of his breakfasts and much of his afternoons observing. The birds arrived, and we would watch them and then scurry to the computer to check our list of small birds of the northeastern United States. At first we were astonished by the goldfinch, dozens of them, with their neon burst of color that changed from lime-yellow to buttercup over the course of a few weeks. William and his sisters jumped up and down at the sight of even the common birds among us: mourning doves and cardinals, blue jays and sparrows.

And then one morning William's yelp took my eye to the feeder and to a bird I had never seen before. It was almost as big as a cardinal, with a sleek black back and bright white breast, with a splash of red that William said looked like the shape of a wine glass. My mother was with us, and she said, "That's a rose-breasted grosbeak. I've only seen one once before, when I was a girl. I was with my father in the parking lot of the Second Baptist Church."

I had already connected my son's curiosity about the birds with his namesake, my grandfather. But somehow the rose-breasted grosbeak and my mother's story made the connection all the more real. My grandfather had a teacher in seventh grade who invited any interested student to go walking in the woods early in the morning. My grandfather signed up, and I always imagined him as the only student on those walks, ready to learn, ready to wait and watch and listen. He learned how to identify the birds not just by their colors but by their calls, so any walk in the woods with him became an experience of delightful mystery, wondering what bird we might hear and whether we could then find it with our eyes.

My grandfather is now 94. He spends most of his days in a bed or a chair looking out the window. He sleeps a lot. My mother asked him whether he remembered the bird they saw in the parking lot of the Second Baptist Church and he responded without hesitation: "A rose-breasted grosbeak." It must have been 50 years ago.

The grosbeak in our yard was joined by two females (who share the shape and size, but not the dramatic coloring of the male) and four other males vying for their attention. They stayed for weeks.

In the meantime, one morning William said, "Mom! What is that?" I looked at the feeder and saw a small bird, the size of a goldfinch, deep blue from head to tail. It didn't appear on our list, but my mother looked it up in her book and we confirmed: an indigo bunting. He came back a few times, but it took patience and attentiveness and some measure of fate to spot that flicker of color, those brightly beating wings. An oriole appeared one morning too, where my astonished husband snapped a picture to prove that he had finally spotted something unexpected out the window too. We saw the oriole one other time, his orange breast like a tangerine.

I have been considering the birds.

And so, when I received a book by this same title—Consider the Birds: A Provocative Guide to Birds of the Bible by Debbie Blue—I began to read. Blue, a pastor and writer, has written a small, delightful, and surprisingly thought-provoking book. Each of its ten chapters delves into the history, theology, and symbolism of birds that show up within the pages of the Bible. The first chapters cover the dramatic birds—pelicans, eagles, vultures, ostriches, quail (and also pigeons, not exactly dramatic)—and they upend some of our assumptions about what the biblical texts might have to say to us through these creatures. (To share one small tidbit: the word we translate eagle might be more faithfully translated vulture, which puts quite a different spin on it, and yet a spin Blue handles beautifully.)

But my favorite chapters came at the end, with a turn towards the birds I see quite often—the sparrow, the raven, the hen, the cock. Without taking you through every marvelous detail and insight Blue offers, I will say I am glad she pointed out Jesus' self-identification with chickens, a most unusual choice for the Lord of all. And I will say that I have returned again and again to her thoughts on the sparrow, a bird that has been pursued with murderous intent by many because it takes over habitats of more beautiful birds. The sparrow is a despised, common, and somewhat nondescript bird. It is also the bird Jesus tells us God loves. In Blue's words:

God's eye is on the sparrow. Our eyes are so often on something with a little more prestige. . . . But the Scripture keeps pressing us to hear this: God loves what is ubiquitous. God loves the world—every single part of it—the bland, the ugly, the dingy squishy-faced, the monotonous and grating. There is no way in which God reserves God's love for what the world finds beautiful or important. God loves the sinner. I believe God might like for us to have some of this love. Have it and share it—widely, all around.

We named our son after my grandfather because of the qualities in my grandfather we hoped our son would inherit or at least emulate. Even now, when I walk into their house for a visit, my grandfather sits as upright as his body will allow, his face alight, his arms open wide. He either calls my name with warmth and happy expectation, or he says, "Hello beautiful!" or "Hello my friend." He asks questions for the sake of hearing their answers, not for the sake of keeping up a light conversation. And he does this with everyone—the children from the neighborhood, the young couple who just moved in up the block, the elderly widow, the nurse who cares for him. His faith in God runs deep, with a current that led him to care for others through friendship and financial support throughout this life. When my mother asked him about death, he told her he is rather excited for "the next adventure." He also told me he plans to get to the ocean this summer.

Patient, present, faithful. But I never connected my grandfather's bird-watching habit with his character traits. I never realized that taking the time to listen to a songbird and know who it is that sings might cultivate the same traits while sitting in the room with your granddaughter. He has spent a lifetime developing an appreciation for beauty, an ability to see the hidden glory, an ability to wait and watch, to be present right now without worrying about the past or the future. He has considered the birds, and this simple lifelong practice seems connected to those deeper marks of character and wisdom.

Jesus told us to consider the birds as a way for us to realize we have nothing to worry about if we trust God to care for our daily needs. Perhaps he also told us to consider the birds because they have much to teach us, much to transform within us. As spring turns to summer and the birds have plenty of food apart from our birdseed, I am still filling the feeder and watching them out the window. The indigo bunting and oriole have gone on their way, but I spotted a red-bellied woodpecker this morning, and I stopped to watch.

Children; Spiritual Formation
May 29, 2014 at 5:20 am
To add a comment you need to be a registered user or Christianity Today subscriber.