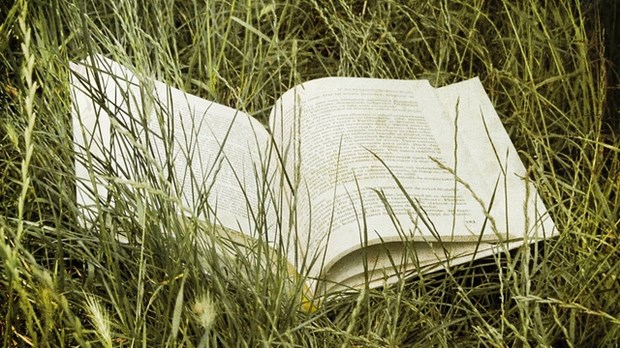 It felt kind of like the Oscars, well, like the Oscars for book nerds. An evening with awards in different categories, a host who made witty remarks, and palpable excitement in the air. Two nights ago, I sat in an auditorium at the New School in Manhattan, for the privilege of listening as the twenty finalists for the National Book Award read from their work.

I had only read two of the books going in to the evening, and I only heard five minutes from each of the books nominated for the award. But still—what struck me about the selections as a whole was their religious nature. By religious, I don’t mean Christian (with the notable exception of Marilynne Robinson’s novel Lila). But I do mean works concerned with the nature of reality and of human identity. Books asking the “big questions” of purpose and meaning, of the self versus society, of morality and beauty and the possibility for grace.

John Lahr, for instance, reading from his biography of Tennessee Williams, not only talked about the social shift from a society focused on the common good to a society focused on the self as we moved out of World War Two, but emphasized Williams’ use of the word grace throughout The Glass Menagerie. Where is grace in this changing world? What is more important—the individual or the society? Similarly, the title of Edward O. Wilson’s The Meaning of Human Existence might say it all. Even though Wilson posits no faith in the divine, nevertheless the book is laden with questions about sin and salvation, virtue and vice.

Many of the books told stories as a way to help readers understand and have compassion—Roz Chast’s Can’t We Talk About Something More Pleasant about aging parents, Citizen: An American Lyric by poet Claudia Rankine addressing race and family, tales of life in China, Pakistan, the American south in the 1960’s, of two teenagers—one French, one German—who meet across enemy lines during World War Two. Stories of human connection and how to make meaning, to hold on to hope, in a broken world.

And then there was fiction nominee Emily St. John Mandel, whose novel Station Eleven takes place as a Shakespearian theater troupe travels around in a post-apocalyptic America. Here again, Mandel’s interest turns to hope and beauty amidst the rubble rather than to violence and despair.

I have not read the vast majority of these books, so I cannot comment on their contents in particular. But I can say that my overarching sense of the books selected demonstrates an ongoing concern in literary culture about the meaning of human existence, and the possibilities for grace and transcendence and beauty in our world. Marilynne Robinson brings Calvinist thought to bear in Lila, and the fact that she has been awarded the Pulitzer prize for Gilead and was nominated for this most recent novel only underscores the willingness of the literary community to engage the same questions that occupy many people of faith.

For Christians, this emphasis should come as an encouragement to engage with these texts, to consider whether Christian faith answers these questions in a convincing way, and to consider what it would take to have a compelling conversation about these ideas. I left the reading buoyed in my faith and inspired to engage more critically with the most recent literature in all four categories.

And yet most people in America paid no attention to the National Book Awards. In fact, three of my friends heard that I was attending this reading, and they thought I meant I was reading from my own book. "Like the Oscars, but for book nerds," I said. Or, as last night’s host at the award ceremony proclaimed, “Like the Oscars, except nobody gives a d***.”

Literary culture in America cares about the big questions. Does anybody else?

Book Publishing
November 20, 2014 at 2:19 pm
To add a comment you need to be a registered user or Christianity Today subscriber.

Surprised by Religion at the National Book Awards

Surprised by Religion at the National Book Awards