Home > 2014 > October
Are Faith and Science Compatible? Hanging out with Christian scientists taught me even more about the nature of God.Amy Julia Becker 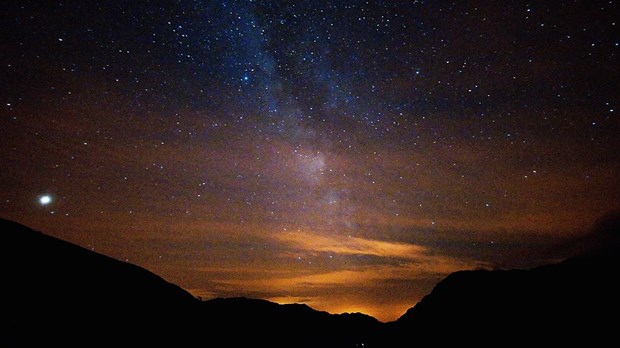 Last week, I had the privilege of attending a conference hosted by The Biologos Foundation. In some ways, I felt like an odd duck. Biologos is an organization dedicated to demonstrating the compatibility of modern science and evangelical faith. I’m all about evangelical faith, but I haven’t participated in a modern science class in over two decades. Still, I’m very interested in the way Christians interpret Scripture (which, at least on the Christian side of the debate, seems to be the crucial matter at stake when discussing evolution), and I spend lots of time writing about what it means that we as human beings have been created by God in a purposeful way.

At the conference, we didn’t talk much about human uniqueness, or the doctrine of the imago dei (image of God), as it turns out. We did hear some compelling presentations regarding evolution, the very very old age of the earth and the surrounding cosmos, and the puzzling (from a Scriptural perspective) scientific conclusion that we are descended from thousands of humans rather than a solitary Adam and Eve. (This final point does not preclude the possibility of an Adam and an Eve existing and being singled out by God for a purpose, but it does lead to lots of speculation without any conclusive proof.)

For me, the experience resulted not so much in affirming my views on science, but rather in reminding me of the ways in which, as the Psalmist writes, “the heavens declare the glory of God” (Psalm 19:1).

Throughout the Bible, the natural world serves as a window into God’s character as the Creator. Jesus follows this pattern when he uses nature both to perform miracles (the feeding of the 5,000, turning water into wine, calming the storm) and, like his predecessors in the Old Testament, as a way to understand who God is. The kingdom of heaven is like a mustard seed . . . Knowing God is like drinking from a stream of living water . . . A farmer went out to sow his seed . . .

So as I sat through presentations that explored the height and breadth and width and age of the cosmos, explanations of the expansiveness of time and space--all knowable only because of modern technology and learning--I was struck by a number of ancient truths.

First, as Richard Mouw (former President of Fuller Seminary) reminded us, God is slow. The universe is 13.4 billion years old (I think I’m remembering that correctly!). It took billions of years for life on earth to exist, much less for humans to populate it. That’s how much time God has. That’s how long God is willing to work in order to create and ultimately recreate this world. As we read in 2 Peter: "But do not forget this one thing, dear friends: With the Lord a day is like a thousand years, and a thousand years are like a day. 9 The Lord is not slow in keeping his promise, as some understand slowness. Instead he is patient with you, not wanting anyone to perish, but everyone to come to repentance."

Second, God is faithful. The Scriptural witness proclaims God’s faithfulness, but what I saw at this conference was the faithfulness of God on display through nature. Take gravity, which exerts its pull throughout the universe in a consistent, measurable, predictable way. The physical laws which govern the planets and the heavens hint at the steadiness, the constancy of God. How glorious to imagine that same faithfulness in our lives.

Third, God is extravagant. There are 500,000 species of beetles. Enough said.

And finally, God is in control. I heard these scientists talk about how God has used random processes in a purposeful way, in a way that resulted not only in human beings but also in human culture—in art and music and love and laughter and hope and joy. Through billions of years and a vastness of space that I cannot comprehend, God has been at work in a purposeful way.

Bio Logos Foundation; Evolution; God
October 07, 2014 at 7:19 pm
To add a comment you need to be a registered user or Christianity Today subscriber.

Are Faith and Science Compatible?

Are Faith and Science Compatible?