Home > 2015 > January
On Our Daughter’s Ninth Birthday, No Thoughts of Who She ‘Might Have Been’The biggest problem with prenatal testing for Down syndrome.Amy Julia Becker 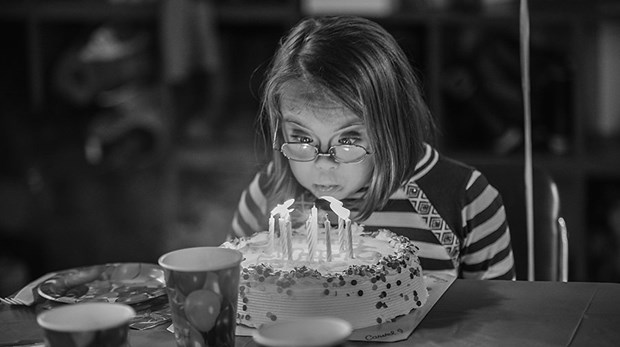 Penny lucked out this year. To celebrate her ninth birthday, she received both a family party at her grandparent’s house and a party with friends at a local gym to honor her recent fascination with all things gymnastics. Both events looked like what you might expect: cake, presents, cries of delight. She loaded up on books and board games and clothes. She reveled in the attention and blew out the candles. Two weeks later, she’s still tugging my arm whenever we see someone for the first time this new year: “Tell them I’m nine!”

And yet, nine years ago, we couldn’t imagine this kind of celebration. When, two hours after Penny was born, doctors told us she had Down syndrome, we thought we had been given a scary and sad diagnosis. We thought we had learned something definitive and negative about our daughter’s future. We thought the daughter we had envisioned and expected had been taken away. We didn’t drink the bottle of champagne someone brought us in the hospital.

In recent years, prenatal testing has advanced to a point that more and more parents are facing a prenatal diagnosis of Down syndrome. A decade ago, screening tests for this condition were far less accurate. But now, with a simple blood draw, some companies claim they can predict with 99 percent accuracy whether or not a baby has Down syndrome. The Boston Globe recently ran an article questioning these claims:

Hundreds of thousands of women in early pregnancy have taken these tests — through a simple blood draw in the doctor’s office — and studies show them to perform far better than traditional blood tests and ultrasound screening.

But a three-month examination by the New England Center for Investigative Reporting has found that companies are overselling the accuracy of their tests and doing little to educate expecting parents or their doctors about the significant risks of false alarms.

As blogger Mark Leach has pointed out, false “alarms” aren’t the only problem indicated through this article. The assumption that pregnant women need to know if their unborn children have Down syndrome in order to consider the option of abortion raises its own set of ethical problems. Moreover, the fact that many doctors are ill-equipped to interpret test results and to offer a fair and balanced description of Down syndrome makes these tests even more dangerous.

Still, the biggest problem I see with these tests is not their false claims of accuracy or even the assumption that abortion will often follow on the heels of a diagnosis of Down syndrome. The problem I see is that of assuming that knowing a child has Down syndrome gives parents much meaningful information at all.

For years after Penny’s birth, her birthday hearkened back to that initial day of life. I could remember in my body the weight of fear and sorrow that stood in such stark contrast to the light and life in the little girl in front of me. And I almost turned my head, I almost looked back with that question that had haunted me in her early days, the question of who she “might” have been. And yet year after year, each birthday came as a celebration of her in the present, a declaration that the fear of the past would not determine her future.

This year, Penny’s birthday didn’t bring me back to those early moments in the hospital. I suppose I don’t need to return to the sadness and fear because they have been so thoroughly replaced by gratitude and hope. I used to wonder what might have been. Now I see who she is, and I only wonder what new gifts she will give us all as her ordinary, wonderful life continues.

Disability; Down Syndrome; Family; Prenatal Testing
January 12, 2015 at 11:56 am
To add a comment you need to be a registered user or Christianity Today subscriber.

On Our Daughter’s Ninth Birthday, No Thoughts of Who She ‘Might Have Been’

On Our Daughter’s Ninth Birthday, No Thoughts of ...