Home > 2015 > January
A Working Mom's Reflections on the State of the UnionWhy I support Obama's proposals for increased childcare.Amy Julia Becker 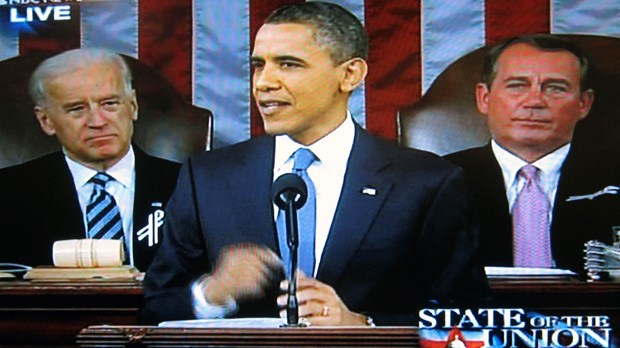 Pundits will argue publicly for the next few days and politicians will argue via legislation for the next few months about President Obama’s sundry proposals in last night’s State of the Union address. But as a working mom, I want to focus on one proposal that deserves attention on both sides of the aisle. In Obama’s words:

It’s time we stop treating childcare as a side issue, or a women’s issue, and treat it like the national economic priority that it is for all of us.

Last night, Obama didn’t offer detailed plans for changing the status quo when it comes to childcare policies in America. He mentioned a $3,000 tax credit per child. He mentioned the historical precedent of universal childcare during World War II. He mentioned the positive economic benefits of assisting single mothers and families where both parents work. 71 percent of households do not include a stay-at-home parent, which means that childcare is an issue that affects the majority of workers and the majority of children in the United States. This issue certainly matters for our economy. But it also matters for our culture.

We moved to Connecticut three years ago, when our kids were six, four, and one. As a writer and speaker, I have a flexible job, so I decided to slow my work to a crawl that year. We needed time to transition to our new home, new town, new schools. And I figured I needed to provide stability for my children. I would be the one they saw every day when they came home from school. In a world that had shifted in every other way, I would be the fixed point, the center.

I failed miserably in the attempt. That fall, I lost my temper on an almost daily basis. My whole life felt out of whack, with priorities off-kilter and discontent my closest companion. I finally gave up and asked a few friends if anyone knew of someone looking for ten hours a week of work.

As it turned out, our neighbors knew of a young woman looking for exactly that amount of work. Lo and behold, she turned out to be a Christian. Over the course of the following two years, she and her husband formed a relationship with our family that humbled me and blessed us all. I started to realize how much pride and self-centeredness had been involved in my insistence that our kids turn to me with their every need rather than trusting God to provide a network of caregivers who would support them. I started to realize that my husband and I bring certain gifts to our children, and that we also bring very particular limitations. Other people fill in where we are deficient, whether by painting Marilee’s fingernails or teaching William about gardening or playing Monopoly with Penny or simply by joining us in teaching them and praying for them.

It’s hard to compare employment and family practices in modern America to Biblical times. And yet we know that the nuclear family has always needed the support and gifts of the broader community in order to raise children well. I hope politicians on both sides of the aisle will grapple with the best way to support Obama’s proposal for something approaching universal childcare, as well as maternity leave, sick days, and flexible work opportunities.

I still only work part time, and now our children go to school five days a week with some supplemental childcare along the way. I continue to believe that my husband and I provide the central form of stability for our kids, and that we are primarily responsible for their spiritual formation. But I have stopped believing that we need to provide their care all the time. Even for working parents who are both at their jobs 40 hours a week, there are another 50-60 waking hours with kids each week. Perhaps part of providing a stable home for our children involves trusting other people to help us care for them.

State of the Union; Work and Workplace
January 21, 2015 at 10:04 am
To add a comment you need to be a registered user or Christianity Today subscriber.

A Working Mom's Reflections on the State of the Union

A Working Mom's Reflections on the State of the Union