In the spring, we celebrate many wonders. Easter tops the list—to say the least. There's the fresh bloom of creation, with its dazzling colors and pulsating life. Then there's opening day of major league baseball. Like the thriving natural world, the splendor of baseball continues into the heat of summer.

A number of wonder-filled things happen during a major-league baseball game. Over the course of the season, we'll talk about a few in The Behemoth, all to suggest that the God of creation made a world in which we could do amazing things—like hitting a major-league pitch. It's not untypical for a pitcher to throw at 90 mph. Many throw into the high 90s, and once in a while a pitcher will break the 100-mph barrier. But say our ace is having an average day and can throw only 90 mph.

This means it takes the ball approximately .4 seconds to reach the batter. The batter has all of .2 seconds to think about that pitch before he needs to make a decision: is he going to swing or let the ball pass?

He needs to decide that in about .2 seconds because he's going to need another .2 seconds to swing at that ball. A lot can go wrong in that .2 second swing.

If it's a curve ball, the break in the curve happens in the last .10 sec of that pitch. So the curve ball would drop right under that bat as the batter swings.

If the batter has misestimated the speed of the pitch by 1.5 mph—say he estimated the pitch was coming at him at 91.5 mph or at 88.5 mph—then his swing would be late or early by a full foot of the ball. And the elevation of the pitch could be off by as much as an inch. A bat is at most 2.75 inches thick at the fattest part, and missing by an inch can cause you to miss the ball—at best hit a soft grounder or weak fly ball.

Spin helps a pitcher fool the batter. By placing some spin on the ball, the pitcher can determine whether the ball sinks a lot, a little, or not at all. Gravity helps the pitcher here. All this of course makes it even harder for the batter to determine which pitch to swing at and where exactly to swing.

The instant that the ball hits the bat, great forces collide. If the ball is going 90 mph and the batter swings at 70 mph, the total relative speed of the ball is 160 mph. So as that ball approaches the bat, kinetic energy switches into potential, and then back into kinetic. But what does that mean?

The ball acts like a spring. The ball comes into the bat, compresses against it, and changes direction, and expands back into its original shape. The forces acting on that bat are in the range of 6,000-10,000 lbs and happen in about 1/1000 of a second. The violence of this collision is why a baseball is used for an average of only 4 or 5 pitches in the majors. Every time a ball is hit, it deforms from all the force applied to it.

The ball actually compresses to the width of about an inch. A lot of energy is lost in the form of heat, friction, sound, and vibrations. These vibrations sometimes are so violent they break bats, especially when the ball hits closer to his hands or at the end of the bat. Batters experience these vibrations as a stinging sensation. If, however, the batter hits the ball about five inches from the end of the bat—the sweet spot—then few (or no) vibrations occur, more energy goes into the ball, and it travels farther.

When the ball hits the bat, the bat recoils, limiting the ball's distance. A heavier bat causes less recoil. But a heavier bat is harder to swing fast. And the speed of the bat more than anything is what causes the ball to go farther.

Sixteen major league baseball players have hit four home runs in a game. Twenty-eight have hit over .400 for a season. These are amazing feats. Overall in 2013, major league hitters averaged .253, which means they hit safely 25 percent of the time. This too is remarkable. Given the physics of simply hitting a baseball, though, even hitting a sharp grounder or long fly ball is a thing of wonder.

What is man, says the Psalmist to the Creator, that you should be mindful of him, and make him able to hit a major league pitch? Or something like that.

—The Editors. A number of websites have information about the physics of baseball. For this piece we relied on this one. 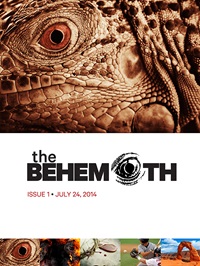