The Miracle of Exponential Growth

The mustard seed is Jesus’ preferred reference for all things tiny. We know now there are objects many orders of magnitude tinier, but without the aid of magnification it’s rare to encounter anything significantly smaller than a mustard seed. If one does find something smaller, it is likely to be inert—a grain of sand or a speck of dust. The mustard seed is dynamic, growing into a bush which begets more mustard seeds.

How exactly does it accomplish this remarkable transformation? The secret is exponential growth. The basic idea behind exponential growth is doubling: one doubles to two, two doubles to four, four to eight, and so on. At first, it doesn’t seem that impressive, but after just ten iterations we’re over 1,000 copies, and in twenty iterations we exceed 1,000,000 copies. If the cells of a mustard plant are doubling, we can begin to see how that one tiny cell can produce something so big in a short period of time.

We don’t commonly witness exponential growth, which is why the parable is illuminating. Most things that we make grow linearly. As children, before we can even speak, we can stack one block on top of another on top of another. Pretty soon we have a nice tower, but it can only grow one block at a time. If mom or dad helps, we can double our productivity, but parents still only have two hands, so the growth of the tower is still linear. We write one word at a time, we walk one step at a time, we score goals one at a time—all the ways we can mark our progress are done on a linear scale.

Through the use of microscopy, we now understand that all living things take advantage of exponential growth at some point; it’s just that it often occurs out of sight. In the case of people, we go through our doubling phase in the womb. We all start life as a single cell. It takes about 24 hours to copy itself, so that one cell can become two after about a day. If we were stuck with linear growth, at a rate of one cell a day it would take over 100 billion years to make all the cells in a single adult human. That’s far older than even the oldest estimates of the Earth’s age, not to mention an unthinkably long gestation period! Mercifully, the power of doubling means we get most of the way there in 9 months; by the age of 18, we have roughly 50 trillion (that’s five with 13 zeroes after it) cells in our body.

To me, the most remarkable thing about that unfathomably large number is this: that same body is also home to ten times as many bacterial cells as human cells. In the last issue of The Behemoth, Jamie A. Davies went into some detail about what bacteria do for us. The following is just a brief summary.

We’re not used to thinking of our bodies as entire ecosystems, but it’s a fairly apt description. There are bacteria on our skin, which may be as unique to each person as their fingerprint. Thousands of different bacteria species live in our gut; this is where the hundreds of trillions of bacterial cells that outnumber our own live. There are also some fungi and archaea that call us home, and even viruses that grow in the bacteria, adding depth to the ecosystem that is you.

For those used to associating these microbes with disease, this picture may be off-putting. While there are a few species of bacteria that cause problems for humans, these gut bacteria are perfectly safe. They are with each and every one of us from birth; if they were all harmful we’d all be sick constantly. Actually, they help to keep us healthy by making it harder for the harmful bacteria to find a place to grow. In a healthy gut, all the good spots are already taken by benign bacteria.

We are still in early days when it comes to research on these gut bacteria. We do know that they are a vital part of digestion. Our food contains molecules that our own cells don’t have the necessary tools to break down into useful pieces. Bacteria can help overcome this deficiency by providing those tools. For example, they turn certain complex carbohydrates into simpler sugars that our own cells can work with. In fact, the main reason termites can eat wood and we can’t is that termite guts are home to bacteria that can turn wood fibers into simpler sugars. If we had the same bacteria in our gut, we might be able to pull off the same trick.

What we don’t know is everything else that these gut bacteria are up to. When they are sick, does that make us sick too? Does the health of our personal ecosystem have a role in metabolic diseases? What about our mental health? We don’t have answers, but we have reasons to believe these are questions worth asking.

The point is this: bacteria could not do their amazing, everyday work at our scale—for example, digesting food for us—if it weren’t for exponential growth.

The mental health connection above may seem far-fetched, but there is precedent for microorganisms of other sorts changing the mental state of their macroscopic hosts. The neurological symptoms of rabies, including confusion and paranoia, are perhaps one of the best known examples; they are why we associate foaming at the mouth with madness.

Or take another example: The hantavirus found in rats is transmitted by bites and scratches, and has been shown to make rats more aggressive, increasing the odds of viral transmission.

Toxoplasma gondii is a parasite that can cause inflammation of the brain and neurological diseases. It is often found in cat feces, which is the reason pregnant woman are discouraged from scooping cat litter.

When Toxoplasma infects mice, it inhibits their instinct to hide from cats, thus making them easier prey. That’s not good for the mice, but it’s good for Toxoplasma, as its life cycle requires it to reside in mice and cats at different stages.

A single virus particle or microorganism, acting alone immediately after infection, cannot achieve these sorts of behavioral modifications. However, with a little faith in the power of exponential growth, they can indeed say to the mountain that is their macroscopic host, “Move!”—and that mountain will move.

On the other hand, our immune system, thanks to the power of exponential growth, can successfully reply, “Not so fast!” and stop the mountain of disease dead in its tracks. Armies in the billions are at war within us.

Perhaps if Jesus were speaking today, he’d say, “If you have faith the size of bacteria . . . .”

Andy Walsh is chief science officer at Health Monitoring Systems, Inc., a public health software company. He holds a PhD from Johns Hopkins University, where he studied molecular microbiology and immunology at the Bloomberg School of Public Health. 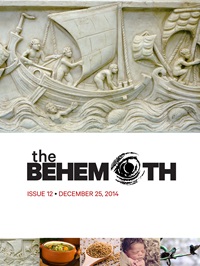