I don’t know if it was a dream or vision. I’d just returned from the hospital, so maybe it was the leftover effects of the morphine. In any case, The Event—as I now call it—was unnerving, though with time, it’s become more of a fading shadow.

I found myself in the presence of an old man with a scraggly and unkempt beard, mostly gray with flecks of black, that framed a welcoming smile. But it was his eyes that caught me. Definite lines with crows’ feet at the edges. As for the eyes themselves—well, I didn’t think love could be communicated with only a look. I sensed I was in the presence of my loving heavenly Father. But as the conversation ensued, I began to wonder if he was just a spacey octogenarian.

“Hello,” I said, reaching out my hand to shake his. I didn’t know if this was appropriate, actually, but I didn’t know what else to do. “I’m Michael.”

That surprised me. It was the first clue that maybe this was not the Almighty.

“I think you do,” I replied, still assuming it might be.

I thought of something the Almighty would surely have noticed recently. “I’m the Michael who failed yesterday to help his wife clean up the house for dinner guests, and then let her do the dishes as well, while I read Sports Illustrated.”

“Come on,” I said in surprise. My mind searched for things the Holy One would definitely recognize. “You know, the Michael who lingers too long over revealing images of women. Who has one too many, well, too many nights just ‘to unwind.’ The Michael who still can’t forgive the slight he received 20 years ago from a so-called friend.”

“No. I can’t seem to recall such a Michael, at least one that looks like you.”

“Really?” I was irritated now. I took a step closer, as much as one can with someone who still seemed exalted to me, and said firmly, “Think! I’m the Michael who lied to the government in 2010 to save himself $323 in taxes. Who doesn’t give as much time as he should to serving the poor. Who isn’t moved often by suffering in the developing world. Who skipped out on a friend’s funeral because he already had a weekend trip to Vale planned and paid for. Who is overweight because of nothing more than gluttony. Who thinks too much about money—okay, is greedy. Who wonders and worries about what people think of him and his reputation—pride. That Michael. You know that Michael, surely!”

“I’m so sorry, but none of this jogs my memory, at least when I look at you, the Michael standing before me.”

“My gosh!” I said (just in case I was in the presence of, well, The Presence). I was now livid. “The Michael who went too far with Sandy and Ellen and Rita and too many others in high school, not to mention the parties. Oh, the parties! Who betrayed his friend Patrick. Who mocked a homeless man while cruising with friends. Who kicked my deaf brother in resentment when he was four!”

“Sorry,” he said sheepishly. “I see nothing but emptiness when you talk about such things.”

“Are you going to tell me that none of this rings a bell?” I nearly shouted in exasperation.

We stood staring at one another, me in disbelief, because there was part of me that wanted to believe this was the Father who knew me better than did anyone else. And yet he didn’t seem to know me, not the real me.

By the grace of God, therefore, man is not nothing.

“Well, what do you see?” I blurted out, still frustrated.

That’s when he looked not just at me but through me. He said, “I’m seeing a man who is a true man, a man who treats women with respect, who forgives friends’ betrayals, who is a faithful friend himself. I see a man who loves his wife and gives of himself sacrificially for her. I see a man who is generous with his time and money, always remembering the poor. I see a man, a true man, a free man, who lives as he was created to live. You’ve been describing someone who is less than a man, a shadow of a man. Actually, you remind me of my son. Now there’s a man.”

This took me aback. I didn’t know whether to laugh or cry. I wanted to believe him. But I concluded that a real Father would know the real me, the me who grows new claws every day to cling to all that sullies my existence. Not the me who only occasionally sprouts wings and soars with new life. The free me is so little in evidence—well, that’s the shadow me. As I said, I wanted to believe him, but I feared he had it completely backwards.

That’s when The Event evaporated like a mist. Still, years later, an old man myself now, I want to believe it.

By the grace of God, therefore, man is not nothing. He is God’s man. He is accepted by God. He is recognized as himself a free subject who has been made free once and for all by his restoration as the faithful covenant partner of God …. We cannot say and demand and expect too much or too great things of man when we see him as he really is in virtue of the giving of the Son of God, of the fact that God has reconciled the world to himself in Christ.

Mark Galli is editor of Christianity Today and The Behemoth. The Barth quote is from Church Dogmatics, Vol. 4.1: The Doctrine of Reconciliation. 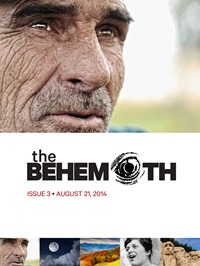