Jesus on the Greatest Party Ever

In one scene in Fyodor Dostoevsky’s The Brothers Karamazov, the character Alyosha is listening to a priest read the story of Jesus’ turning water into wine at a wedding. We hear his mental commentary: “I love that passage; it’s Cana of Galilee, the first miracle. . . . Ah, that miracle! Ah, that sweet miracle! It was not men’s grief, but their joy Christ visited, He worked His first miracle to help men’s gladness . . . He who loves men loves their gladness, too.”

I identify with Alyosha. I love that story. And the parables of finding lost sheep and coins, of prodigal sons who return home to find forgiveness.

But let’s face it: Jesus also tells parables where the king or master—seemingly representing God—is mean or arbitrary. One puzzling tale depicts a king who, after preparing a splendid wedding banquet and inviting everyone (“the good and the bad”), does this:

But when the king came in to see the guests, he noticed a man there who was not wearing wedding clothes. He asked, “How did you get in here without wedding clothes, friend?” The man was speechless.

Then the king told the attendants, “Tie him hand and foot, and throw him outside, into the darkness, where there will be weeping and gnashing of teeth.” (Matt. 22:11–13)

I admit there’s a part of me that harbors the fear that this parable may get God exactly right: that he can be arbitrary and tempted to anger—and that my job is to appease him. I never say this in so many words. But I have a hard time shaking the idea that if I don’t behave myself, I will be the object of God’s anger or deep disappointment.

This parable only seems to reinforce this fearful theology.

Then I read the parable a little more closely.

Note what the kingdom of heaven is compared to: a wedding banquet. What’s more joyful than a wedding banquet? We spend many thousands of dollars on them. This is one meal where excess is permissible. Where we happily eat more than we should and drink more than is wise and dance like fools—and no one minds. We leave satiated, perhaps a little tipsy, warmed by the laughter of the night. It is a carefree, celebratory event.

It is a picture, Jesus says, of the kingdom of heaven. And if the kingdom of heaven is among us in Jesus (Luke 17:21), it is at least a partial picture of the essence of the Christian life even now—a joyful, even excessive, banquet, with all the stops pulled out, where celebration is the order of the day.

Jesus is not breaking new ground with this idea. It is found all over Scripture. In Isaiah 25, to take but one example, we read, “On this mountain the LORD of hosts will make for all peoples a feast of rich food, a feast of well-aged wines, of rich food filled with marrow, of well-aged wines strained clear .. . . It will be said on that day, Lo, this is our God; we have waited for him, so that he might save us. This is the LORD for whom we have waited; let us be glad and rejoice in his salvation” (vv. 6, 9, NRSV).

What’s stunning in this parable, then, is not the action of the master but the stupidity of the people. Person after person is invited to come and celebrate at this extravagant feast: “I have prepared my dinner,” says the king, “my oxen and my fat calves have been slaughtered, and everything is ready; come to the wedding banquet” (Matt. 22:4, NRSV).

At this point the parable comes a little too close to home. I have things to do, plans to plan, dreams to dream. The world is going to hell, my family is in crisis, the church is falling apart, suffering abounds everywhere we look. Who has time to party? Are you kidding? Don’t you realize how many important activities I attend to? I barely have time to rattle off a brief prayer in the morning. You think I’m going to waste time enjoying myself when I could get something useful done?

And so, as the parable says, we “make light” of the invitation. In modern parlance: we blow it off.

The king, of course, is not pleased with the guests who refused his invitation to joy, so he extends the invitation far and wide, to “both good and bad,” to anyone and everyone, just so his banquet will be teeming with guests. You can’t have a rip-roaring party if you don’t have a big room full of lots of people. The king is apparently less concerned about who exactly is there. Topmost is that his wedding overflow with delight.

At this party, one guest shows up in inappropriate attire. The king is not happy. I suppose this is, in one sense, a picture of a demanding God. But note what exactly the king is demanding: that the guest act like this is a wedding, a joyful banquet of unparalleled delight.

But instead of donning an outfit that befits a celebration, the guest has shown up in a business suit.

Perhaps this guest may be thinking, This is a socially important event, no doubt about it. But I really don’t have time for this sort of nonsense. So I’ll put in an appearance; I’ll just pop in, say a few hellos, extend my congratulations, and get back to my business. The king will understand.

But Jesus suggests that no, the king will not understand. He does not understand people who imagine that the future of the world, the church, their family, or their business hinges on their efforts. Who fail to see that the gospel life is not first and foremost a life of duty but of joy. Who think it more important to do stuff for God than to be with God. Who start each day with a to-do list instead of a to-enjoy list. Who take more pride in their accomplishments than in what Christ accomplished. Who think that life is about counting calories and carbs instead of dining with abandon. All this the king decidedly rejects.

Like many parables, this is designed to shock. It’s not a picture of how God reacts to our stupidity. While we ignored God’s invitation to his glorious banquet, he died for us. God was in Christ reconciling those who blew off the invitation, not counting their social blunders against them. In short, God is gracious from start to finish.

But Jesus shapes this parable to startle us. He raises the stakes in the story, so that we can see why a human king would react with rage. All this king wants to do is throw one big, memorable party, and people left and right refuse to come. And then when they show up, they act like it’s not the wedding banquet that it is.

Actually, I can perfectly understand the king’s reaction. I take a friend out for a splendid meal at the finest local restaurant to thank him or honor him for something. I tell him to order whatever he wants—a cocktail and appetizers, a bottle of his favorite wine. My gosh, order the most expensive thing on the menu! I don’t care. I’ve designed the evening to be a celebration of and for my friend.

And yet my friend doesn’t get it. He’s worried about how much this all costs. He orders no hors d'oeuvres. He only asks for water. He orders a chef salad for dinner and refuses dessert.

That’s when my heart sinks. I may not display anger at the restaurant, but I go home fuming. I tried to throw a party for my friend, and he refused it. That’s the last time I’m doing anything of the sort for him.

So it makes sense to me that Jesus would picture a human king in this way. Jesus uses that very human reaction to shake us into realizing this basic truth: God is throwing us a banquet whose lavishness we can hardly grasp. He goes to the Cross to make joy the fundamental state of the universe. To refuse to see that, to live like there is no party, to fail to see that the basic reality of the universe is such good news that it births delight and thanksgiving—that’s the greatest tragedy of life.

We don’t have to get sentimental about this. Jesus does call us to do stuff. And he tells us we’ll have to endure hard things. But in the midst of the tasks he gives (some of which, yes, are arduous), and in the midst of suffering we will have to endure, he reminds us that the heart of reality is not work but celebration, not pain but happiness, not tedium but joy.

The reality we swim in is an eternal banquet, with the richest of foods, the finest of wines, and the greatest of bands, a banquet permeated with laughter at the unimaginable goodness of everything. The God who prepares the banquet invites the good and the bad. Fortunately, each of us fits one of those two descriptions. But whether good or bad, we mustn’t play the fool and miss out on the greatest party ever thrown.

Mark Galli is editor of Christianity Today and co-editor of The Behemoth. 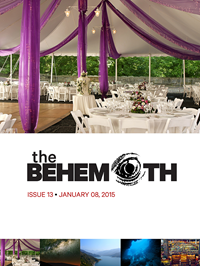