I Fought the Law

The law, as in the ethical commands of Scripture, has gotten a bad name in Christianity. I should know. I’m one of those writers who has tried to give it a bad name, linking it to words like oppressive, burdensome, and legalistic. Like an automobile engine without oil, a law-based life heats up rapidly and explodes, broken camshafts erupting through the hood, the car coming to a slow stop with smoke trailing behind. In settings where the law has become a substitute for grace, I echo Paul: “Stand firm, then, and do not let yourselves be burdened again by a yoke of slavery. . . . You who are trying to be justified by the law have been alienated from Christ; you have fallen away from grace” (Gal. 5:1, 4).

The law’s seamy reputation is not helped by verses like that. Or by biblical stories like the following. On one visit to Antioch, Paul was disturbed with Cephas because he was bending the knee to Jewish eating laws:

When Cephas came to Antioch, I opposed him to his face, because he stood condemned. For before certain men came from James, he used to eat with the Gentiles. But when they arrived, he began to draw back and separate himself from the Gentiles because he was afraid of those who belonged to the circumcision group. The other Jews joined him in his hypocrisy, so that by their hypocrisy even Barnabas was led astray. (Gal. 2:11–13)

So we add hypocrisy to the word association game.

But then we run into the words of Jesus:

Do not think that I have come to abolish the Law or the Prophets; I have not come to abolish them but to fulfill them. For truly I tell you, until heaven and earth disappear, not the smallest letter, not the least stroke of a pen, will by any means disappear from the Law until everything is accomplished. (Matt. 5:17–18)

Praise be to you, Lord;
teach me your decrees.
With my lips I recount
all the laws that come from your mouth.
I rejoice in following your statutes
as one rejoices in great riches. (Ps. 119:12–14)

This is no isolated passage, but the very theme of each of the 150 verses of that Psalm.

Such verses and a new insight have prodded me to see that it is not just grace that prompts praise in the mouths of worshippers, but also law.

My thinking began to shift when I read a modern Jewish apologetic for the law-based life, Halakhic Man. As a Christian, I didn’t buy the whole argument, but when I was finished, I did take away the following.

The universe, created by our good God, lives and breathes according to steady, predictable physical laws, like gravity and the speed of light and the Pythagorean theorem. We’ve recently discovered a certain amount of indeterminacy in the physical laws of the universe, but even so, the patterns and behaviors of the physical universe are so consistent that physicists can reduce them to mathematical formulas and numbers. We can predict that if we do X to Y, we’ll get Z—cool water to 32°F in typical atmospheric conditions and the liquid will become a solid. Always.

I quickly realized that if this universe was created by God, then it must reflect something of God’s very character. It only makes sense to assume that a universe enmeshed with law was created by a being in whose nature law is somehow enmeshed.

This God did not, however, stop with the creation of a law-abiding physical universe. He also created men and women, and right from the start he gave them laws to obey: From “Be fruitful and increase in number; fill the earth and subdue it” (Gen. 1:28), to his command to work the garden (Gen. 2:15). Nothing there about how he loved them or would care for them. No other assurances of psychological comfort. Rather, the first words of God to men and women are commands: do some things, do not do other things.

Note also that after the miraculous Exodus from Egypt (clearly the highpoint in the history of Israel), God did not tell his people, “You’re free! Go and enjoy yourselves!” No, he gave them the Law. Law after law after law.

This God is not an omnipotent control freak, nor a micromanager beyond comprehension. But he is one whose benevolent nature cannot be grasped without law, whose people cannot be fulfilled unless they submit freely to divine laws both physical and moral. We understand the physical part: you cannot be a happy human being unless you submit to the law of gravity; you cannot jump off cliffs and expect to fly. And we generally understand the happiness of obeying moral law: You cannot go around killing people or committing adultery or bearing false witness and expect to live peacefully in community.

And yet we’ve all experienced moral law as something that doesn’t bring happiness. So Paul’s framing could tempt us to think the gospel is about abolishing commandments and enjoying freedom from law.

Our misunderstanding is clear from the promise of God revealed to Jeremiah:

I didn’t notice until recently that God doesn’t promise that the law will be abolished or forgotten. The promise in the new covenant is that the law will become a part of us, as it already is a part of God’s nature. In the new covenant, then, the law remains central to the lives of God’s people—one could argue more central than ever, at the heart of our beings and our community.

And where does grace fit in? Right in the middle. What God wants is a people who freely submit themselves to him and his laws. If we obey the law because we’re trying to prove to God that we are worthy of salvation, or because we feel guilty if we don’t, or because we don’t want to go to hell—well, the obedience is not free. It is prodded by fear or anxiety. It’s coerced.

This is not the obedience God created us for. This is not the obedience that leads to human flourishing. But unfortunately, this is the submission that too many churches essentially demand. They manipulate us with fear or guilt, and—suckers that we are for this sort of thing—we fall for it. But it isn’t long before our lives look like that automobile whose engine has no oil.

God interrupts this dysfunctional relationship with the law we find ourselves in and offers a word of grace. The demands of the law, the fear and anxiety that the law engenders—well, that’s been killed on the cross. The weight of sin, our failure to abide by the law, has been taken off our backs. What God says through Jesus on the cross is this: “You don’t have to obey the law to be my son or my daughter. Relax.”

So we truly are free from the law. We don’t have to do anything now. It is finished. All that legalism and guilt and anxiety the law summons in the hands of the sinful—that is finished.

When we get to that spiritual crossroad, we see stretching before us not the empty waste of desert, but another road, with views of wildflowers and towering trees, and mountainscapes and valleys of breathtaking beauty. That road is called Law Highway. It needs no street lamps because it shines with glory. This is a vision that made song writers compose the longest chapter in the Bible.

Replies God, “You could do worse than obey the Ten Commandments and the Sermon on the Mount, and, of course, the summary of the law.”

To which liberated people forgiven in grace will say, “Of course. Of course. We’d love to do that!”

This is a scenario we experience infrequently in this life. The ugly side of law still has a hold on us, in part because we have such a hard time believing we are forgiven and accepted, believing that we really are free. But from time to time, we see the truth of our situation, and we are flooded with gratefulness and awe, not due simply to the wonder of grace but also to the glory of law, and like the Psalmist (119:33–35) we sing,

Teach me, Lord, the way of your decrees,
that I may follow it to the end.

Give me understanding, so that I may keep your law
and obey it with all my heart.
Direct me in the path of your commands,
for there I find delight.

Mark Galli is co-editor of The Behemoth. 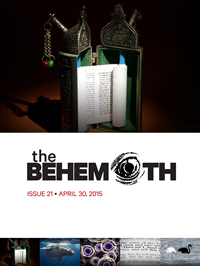