The Aliens in Our Oceans

“It is only reasonable to think that matter for praising God should be taken from the sea, which is fraught with so many wonders.” — John Calvin, Commentary on Psalm 148

On a rare, warm day in mid-March, when back in New Hampshire the snow was melting into mud, and in Boston, everyone else was strolling along the harbor or sitting on benches licking ice cream cones, I quit the blessed sunlight for the moist, dim sanctuary of the New England Aquarium. I had a date with a giant Pacific octopus.

Her name was Athena, but I didn’t know that then. I knew little about octopuses—not even that the correct plural is not octopi, as I had always believed (it turns out you can’t put a Latin ending—i—on a word derived from the Greek, like octopus). But what I did know intrigued me. Here is an animal that has venom like a snake, a beak like a parrot, and ink like an old-fashioned pen. It can weigh as much as a man and stretch as long as a car, yet can pour its baggy, boneless body through an opening the size of an orange. It can change color and shape. It can taste with its skin. Most fascinating of all, I had read that octopuses are smart. This bore out what scant experience I had already had; like many who visit octopuses in public aquaria, I’ve often had the feeling the octopus I was watching was watching me back, with an interest as keen as my own.

How could that be? It’s hard to find an animal more unlike a human than an octopus. They have no bones. They breathe water. Their bodies aren’t organized like ours. We go: head, body, limbs. They go: body, head, limbs. Their mouths are in their armpits—or, if you prefer to liken their arms to our lower, instead of upper, ... 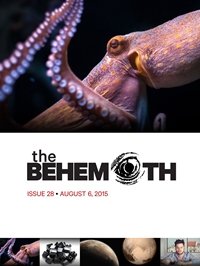