On a field trip on a September day, my students and I stood on a rocky ocean shore, mesmerized by an object in the water. Bouncing with the waves between a rock outcropping and the rocks of the shore lay an 18-foot dead body. Its sleek form was black with shades of gray and purple. It was a dead whale, lying on its back. The tail and flippers were discernable, but the shape became less recognizable as our eyes scanned forward. The throat, pleated in life, had expanded. A massive spherical bubble eclipsed the familiar shape where we expected its head to be.

Was this a stomach extruded and filled with gases from decomposition? I was not sure what exactly we were seeing. But I did know this: I was on a field trip on a beautiful fall day, it was a dead whale, and it was both disturbing and mesmerizing! Many parts of the natural world have that combination of concurrent attraction and repulsion, but this was bigger and rarer. We stood and marveled.

For weeks afterward, when anyone asked me how the semester was going, I replied, “My semester is great. My students and I saw a dead whale in Gloucester. It was so gross and so fabulous.”

Leaving the shore, I knew the scene would become even more macabre as fish, birds, and crabs consumed the whale carcass in ripped-off chunks large and small. For those scavengers, it must have felt like a grand feast. But the creatures around Gloucester didn’t know how lucky they were.

Imagine living in the dark and cold of the abyssal plain, that vast land deep under the ocean’s surface and far from a continental shelf. These ocean bottoms are some of the most remote, unstudied, and inaccessible parts of the globe. Light does not penetrate; no photosynthesis occurs with which to drive a food web. Tiny food particles drift slowly down from the surface, sometimes miles above. Creatures that live here survive in the cold and dark, with little food, growing slowly.

Until, a mile or two above them, a whale dies. A giant cornucopia falls to the floor, providing the kind of carbon and other resources that would normally take up to two thousand years to drift over their home.

The riches of a whale carcass, sometimes as large as 160 tons, provide food for decades—a vast bounty in a world of scarcity. The swimming scavengers arrive first: Eel-like hagfish, which cover themselves in slimy mucus. Rattail fish, skinny and fearsome. Sleeper sharks, with their ragged teeth. They all swim in to grab bites. Crabs and their crustacean cousins, the ocean isopods with their many feet, scramble by to pinch off bits. The banquet can last months. Or years.

Then come the oddities in a second stage. The first scavengers leave once most of the soft tissue of the whale fall is eaten. Then the bones and the sediments beneath the carcass, which are full of fats and other edibles, provide housing and nutrients to a thick carpet of worms and small crustaceans. Mussels and snails join the community. Sometimes as many as 40,000 creatures crowd into a square meter, about the size of a card table.

The worms are weirdly spectacular. Some worms in the genus Osedax float through the ocean, blind and mouthless, hoping to land on a whale carcass. Once there, they grow what look like roots into the whale bones, and absorb nutrients. They grow feathery appendages out the other end, to absorb oxygen. They look like little mosses, only red. Even without a gut, they digest the bones, using acids released from their skin to absorb the remains. Even more fantastically, these worms contain bacteria that live within them. The bacteria pour into the bones as well, possibly helping to dissolve the structures. These “Bone-eating” or “zombie” worms had an even bigger surprise in store for people who studied them: at first it appeared that there are no males. It took years for scientists to discover that the males are microscopic and live inside the bodies of females, providing sperm as needed.

After this alien stage of creatures has had its fill, the whale fall enters its final, “sulfur-loving” stage, which can last decades. As the complex fats in the whalebone break down in a process without oxygen, they release sulfur compounds. Some bacteria can use the energy from these compounds instead of sunlight in order to produce sugars, and they form the base of a complex food web comprising almost 200 species.

These anaerobic bacteria and the organisms that depend on them are remarkably similar to the creatures in deep sea hydrothermal vents and in “seeps,” where hydrocarbons such as crude oil or methane ooze out of the ocean crust. At least 30 of the 400 or so species that live on whale falls also live near hydrothermal vents or cold seeps.

So this is the great story: Deep in the darkest part of the oceans, where food is scarce and light does not exist, every once in a while, a great feast arrives from the surface. The giant’s death supports an elaborate succession of creatures dependent on such a bonanza. Creatures here are unfathomable—wild and tangled, able to survive cold and pressures that would kill us, able to live on the dead body of an animal itself long-lived, gigantic, and majestic. There is no waste here, no sorrow over a death which offered life for others for so many years in this otherwise desert. There is only a secret showcase of provision and flourishing, a hidden model of fruitfulness in the face of the pressures of these depths.

Whale falls are extremely difficult to study. Human ability to descend into the ocean is only now taking us to places where we can see them. Everything we have seen with our remote vehicles or manned submarines is only the tiniest glimpse of the mystery of the distant ocean bottom. When I stood with my students on the shore, looking at the bloated carcass of a smallish dead whale, we were tapping into the inscrutable marine world far away that we will never see.

Neither I, nor the students with me on our field trip, had ever before seen a dead whale outside of a nature film. Decay is not naturally attractive to many people. It was gross. And fabulous. But to the myriad creatures designed to clean the world of dead things— the scavengers, the worms, and the bacteria whose bodies allow them to use resources we cannot—the purple-black and gray of that corpse represented not life’s end, but its provision. Not a loss, but the beginning of a community that would last for generations.

Dorothy Boorse is professor of biology at Gordon College. 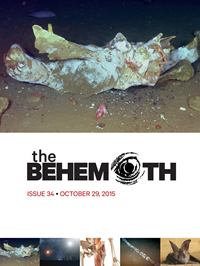