I Want to Be a Zombie Ant

Weep not for the carpenter ant. Well, I don’t suppose you would. They eat our food, intrude on our picnics, and moderately disrupt our comfortable lives.

Granted, they work with unity and symmetry as if they have a well-formulated plan. They have organizational and architectural skills that are examples for both industry and technology. And thousands will work as if for one purpose or goal. But forget about that for a moment. It’s better for this article if you think about how annoying they are.

Once the parasite latches onto the antenna of the carpenter ant, it releases a chemical that is able to manipulate behavior and control.

“Infected ants behave as zombies and display predictable stereotypical behaviors of random rather than directional walking,” Penn State entomologist David Hughes explained in a 2011 journal article. Through chemical manipulation of the ant’s brain, the fungus makes it leave the colony’s nest in the dry, hot, tree canopy, where things are best for the ant. It leads the ant to the underbrush nearer the ground, where it is humid and life is best for the parasite. That random, bumbling walk is not random for the fungus: it keeps the ant from being able to climb back to the canopy.

The fungus keeps the ant wandering about 10 inches above the forest floor—and then, right at solar noon, the ant bites as hard as it can into a leaf (these ants don’t normally bite leaves), locks its jaw, and dies.

After two or three days, a stalk erupts from the dead ant’s head. It soon begins shooting out new fungal spores, which will be picked up by more carpenter ants. And the cycle begins again.

In Parasite Rex, science writer Carl Zimmer notes that it’s an amazing feat just to live inside another creature—“locating it, traveling through it, finding food and a mate inside, altering the cells that surround it, outwitting its defenses.” But mind-controlling parasites go far beyond this. It’s perhaps inaccurate, he suggests, to keep thinking of the carpenter ants as carpenter ants. The parasites are “becoming in effect [the ants’] brain, and turning them into new creatures.”

When I first read about these parasitic invasions, my reaction was one of distain and disgust. But I soon asked, What did the parasite do that I could consider … wrong? Wrong, at least, for a fungus? This is the nature of the fungi. In order for it to live, the ant must perform a certain service. And die.

More to the point, the fungus infects its host for the betterment of itself. Yes, the fungal parasite eventually kills the ant, but that is more a by-product of the parasite’s infection, not the purpose of the infection itself. The purpose of the fungal infection, as Hughes writes, is that the parasite “requires the ant for reproduction.” The ant serves a purpose—it becomes a new creature altogether, a vehicle for the missional function of another.

Oddly, I found myself less disgusted by the ant than inspired by it. I am not eager to compare God to a parasite. But the relationship of the ant and the parasite reminds me of my purpose as a follower of Christ, just as the disturbing relationship between slave and master reminded Paul of the same thing. As the parasite uses the ant, I want to be used of God—a vessel, a tool, an instrument bent toward accomplishing his purpose whatever the consequences may be, serving a purpose not my own, but his.

Of course, God is not a parasitic infection indifferent to its host. Or one whose will always looks the same in each repurposed creature. And the most important difference is that the fungus has no rightful claim on the ant, no reason why its goals should be placed higher than the insect’s.

However, now when I “consider the ant” (Prov. 6:6), I’m less prone to think about its industriousness or work ethic. Instead, I think about my own fleshly inclination to accomplish my will and purpose. And how when God takes control, it may be scandalous and abrupt, but it is beneficial for creation. His control of my life may lead to death, but not to my (or anyone else’s) destruction.

Chad Meeks is a PhD student and adjunct professor at Southwestern Baptist Theological Seminary. He recently wrote The Behemoth’s article on the timeless life of a photon. 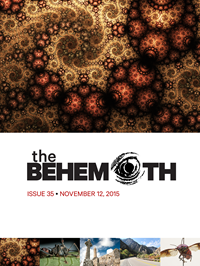