How many are your works, Lord! In wisdom you have made them all; the earth is full of your creatures… May the glory of the Lord endure forever; may the Lord rejoice in his works. — Ps. 104:24, 31

A good name is more desirable than great riches. — Prov. 22:1

When Matt Damon made botany look cool for a brief moment in the movie The Martian, scientists hoped to push their real-life bush tomato plant into the limelight. Named after Damon’s character, Mark Watney, the newly dubbed Solanum watneyi has large purple flowers and round yellow fruit and grows in the Australian bush. The plant is in the same genus as the potato plant that Watney coaxes to grow on Mars.

The name joins others in the tradition of naming species after famous people or fictional characters—a practice that has increased in recent years.

In January, an Australian leech was named Chtonobdella tanae after author Amy Tan, who mentions jungle leeches several times in her book Saving Fish from Drowning. At only one centimeter long and two millimeters across, it’s too small to dissect. Instead, biologists described it using computed tomography scanning.

“I am thrilled to be immortalized as Chtonobdella tanae,” Tan enthused. “This humble leech has looped across a new scientific threshold—the first microscopic soft-bodied critter to be described inside and out using CT scanning. Imagine the possibilities for identifying legions of tiny organisms that have thus far lived in obscurity. I am now planning my trip to Queensland, Australia, where I hope to take leisurely walks through the jungle, accompanied by a dozen or so of my namesake feeding on my ankles.”

Shakira has a parasitic wasp (Aleiodes shakirae) that causes its host caterpillar to wiggle. Stephen Colbert has a spider namesake (Aptostichus stephencolberti) after he “shamelessly begged on national television.” Historical figures are memorialized, too. Herman Melville has a prehistoric whale (Livyatan melvillei). Benjamin Franklin has a tree shrub (Franklinia alatamaha). Even Hitler has a species of cave beetle (Anophthalmus hitleri).

It might seem silly to name or describe an organism based on a human’s accomplishment (or notoriety). But human action has always been an odd and surprising part of the process. For some reason, the God who created these organisms and knew every minute detail of each living thing decided not to name them.

He invited Adam to do it. Humans, who sometimes can be silly, haphazard, sarcastic, or overconfident in all their knowledge, are somehow included in the important work of naming.

As such, naming organisms is an imperfect business.

When I asked biologist David Lahti what the significance was in naming living things, he suggested that naming something helps us not to forget it. It connects us on a deeper level than simple observation. It helps us to take pleasure in the animals and plants, joining with God’s creative work. “The Lord takes pleasure in all he has made!” (Ps. 104:31, NLT).

That God is proud of what he created seems to also have inspired a number of fathers of modern science. Carl Linnaeus, the father of modern taxonomy, created the system we use today in his search for a natural order to God’s biological creation. An 18th century Swede, Linnaeus held the prevailing view of the day, that science reveals the mysterious ways of the Creator.

In Philosophia Botanica, Linnaeus wrote, “If you do not know the names of things, the knowledge of them is lost too.”

Elsewhere, he likened his work to that of a contemporary Adam: Deus creavit, Linnaeus disposuit (God created, Linnaeus arranged).

Underneath the hierarchy of kingdom, all species fit within genus, family, order, and class. Later taxonomists added the rank phylum. The official scientific name for each species is binary, taking the word from the genus and adding it to the species.

For scientists who need to communicate globally with other scientists, modern taxonomy is quite practical. But it is also a human construction that attempts to impose order on the relationship of living things—and as such, it has its challenges.

One big problem is simply that microscopic organisms have proved tricky to classify. Linnaeus himself practically ignored them. As microscopes improved, biologists began to describe “new” organisms. As early as the 1800s, scientists began to label protozoa. The term Protista was used as the “fourth kingdom of primitive forms.” In 1969, Robert Whittaker defined Protista as “unicellular or unicellular-colonial organisms that have no tissue,” and proposed separating Protista to create a fifth kingdom called Monera for bacteria.But further advances in DNA sequencing revealed that protists are not all genetically related. Furthermore, US textbooks often divide the Monera kingdom into two separate kingdoms: Archaea/Archaeabacteria and Bacteria/Eubacteria, but various other divisions have been argued for the Protista kingdom as well.

It’s not a simple matter at all.

Of course, we’d like to know what we don’t know. But predicting the number of unknown species has also been difficult and controversial. A 2011 study published in the journal PLoS Biology suggested that 86 percent of the Earth’s species and 91 percent of the ocean’s are still unknown—and thus unnamed. At the time of the paper, roughly 1.2 million species had been scientifically classified, leaving about 8.6 million to go.

Some classes of living things are well documented—we’re doing well with mammals and birds, for example—but the shelves are sparse for others. While the authors estimated 7 percent of fungi have been named, critics argued that even that low number was far too high. In either case, the world contains vast numbers of undiscovered species in those less-studied groups of organisms, such as fungi, bacteria and archaea (single-celled microorganisms lacking a nucleus).The number is almost too vast to comprehend. For every species we have named, millions of others have eluded us. Despite all the volumes of books filled with naturalist sketches and descriptions, all the specimens that have been studied under a microscope, there are millions of creations we don’t even know about yet.

As humans become aware of these living organisms, which have functioned and plodded through history without our knowledge, we still get to name them. Whether we’re inclined to be proud, or serious, or goofy (looking at you, entomologist Neal Evenhuis, namer of Pieza rhea and Meyomyia), God has encouraged—even commanded—this kind of participation in his creation. This man-made system of classifying all living things has its challenges and imperfections. We get things wrong once in a while and have to reorder massive parts of creation. But as in Eden, he’s still watching us discover, listening to us bestow names on what he has made.

Biologists disagree on whether we’ll ever complete the list, but everyone agrees that the list is massive. As Lahti told me, it’s completely reasonable to put an eyedropper of muck into a Petri dish, peer into a microscope, and say, “I wonder if I’ll see anything new today.”

What is man that You take thought of him,
And the son of man that you care for him?
Yet You have made him a little lower than God,
And You crown him with glory and majesty!
You make him to rule over the works of Your hands;
You have put all things under his feet,
All sheep and oxen,
And also the beasts of the field,
The birds of the heavens and the fish of the sea…
O Lord, our Lord, How majestic is Your name in all the earth! 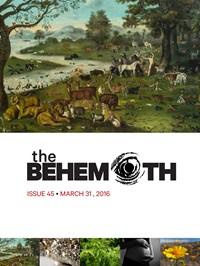