Five Steps for Researching the (Maybe Racist) History of Your Home

Maybe you’ve heard the aphorism that your zip code determines your destiny. It’s the idea that the location where you are born, grow up, and go to school influences your life prospects–it affects your quality of education, health, career pathways, and so on.

Before you even have a chance to start making choices of your own, your physical space has made some choices for you. The idea makes sense, and it begs a question: How did your family come to the place where you were born in the first place? In fact, how does any family come to live where they live?

I live in a postwar cape cod in a western suburb of Chicago. How is it that this house came to be here, and how did my family come to live in it?

What Justice Issues Are Tied Up in Your House?

I did a little research on the ownership history of my home a while back. I had a call with the historical society, figured out how to find property records from the 1800s and 1900s, and pulled tax documents. I pieced together a fairly complete chain of ownership running back to 1845. That’s when the United States first awarded the land where I live to an individual to be privately owned. The U.S. Government awarded a patent of ownership to a man called Thomas Patchell (see the patent above).

My family and I live on the traditional lands of the Potawatomi who built villages along the Illinois River and its tributaries. The U.S. transferred Potawatomi communities first to Missouri, then to Iowa and Wisconsin where communities continue living to the present day. As the Potawatomi were departing, Thomas Patchell was arriving.

Of course the transformation of the land into a unit that was made available for private ownership was a necessary condition for me being able to purchase it more than a century-and-a-half later. I also wanted to know how the land came into U.S. possession in the first place. After digging a little, I learned that the land given to Patchell had come into the U.S. under the terms of the Treaty of Prairie du Chien, signed only 16 years prior in 1829. 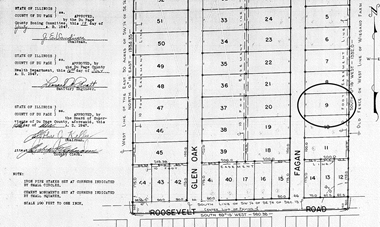 Plat of subdivision, this document subdivided a larger parcel into a residential neighborhood in the 1940s.

In one figure, you'll notice the lots created by this process. In the other figure, you'll see the restrictions placed on the sale and management of these lots.

Part of this story includes the subdivision of a larger piece of farming property into residential lots. In the case of my neighborhood, this subdivision took place roughly 100 years later, in 1947. I found the document that enacted this subdivision of one tract into many individual lots. This, too, set the stage for my ability to buy my home decades later.

I think that truth-telling is one of the first steps toward justice. In that spirit, I quote the restriction placed on my lot from 1947:While I knew that racial exclusion clauses were common on these documents, I was sorry to see it there. These clauses set racially-based limitations on who was allowed to purchase the property my family and I currently enjoy.

"No lot in this subdivision may be owned or occupied by any person who is not a Caucasian."

Restriction clauses on the plat of subdivision. Includes a racial exclusion clause.

Part of the answer to the question above, about how any of us came to be born in our zip codes in the first place, is that real estate laws determined where people of different skin colors would be allowed to live. This restriction is not enforced now, but for decades, it meant that a whole racially-defined segment of the population was allowed to make this their home, and another racially-defined segment of the population was not allowed to do so. And that kind of legacy can be hard to dislodge.

How is land parceled in the United States?

It’s like grids inside of grids inside of grids. At the largest, we have meridian lines crisscrossing the United States, forming regions subdivided into tracts. Tracts are roughly twenty-four miles square. Each of these tracts contains sixteen smaller units called townships (6 miles square). Are you overwhelmed yet? The units get smaller still. Townships contain 36 sections of one square mile each. And each section can be divided into ½ section, ¼ section, ⅛ section, or even smaller. When the United States awarded private individuals parcels of land, it was usually fractions of sections. Later, with suburbanization, these sections were subdivided even further into developments and lots.

I originally did this property research as part of my Ph.D., and parts of the work ended up in my dissertation, but what I didn’t expect was how these discoveries would affect me personally. To own an asset, a house and piece of land that has been legally withheld from others on the basis of their race, is as concrete as it gets. It is literal ground, bricks, walls, and a roof. It is the legal right to control the use of the property. It is physical evidence of systematic racism, and I literally live inside of it.

There are many factors which affect where people live. Part of it is individual choices. Part of it is outside of anyone’s control. Part of it is the history of land policy. That last one is encoded in the patents, plats, and deeds that pertain to many of our homes–documents available to us if we want to dig.

Tips for Doing Your Own Property Research

First, property research can be confusing. Record keeping is not standardized, so you’re going to run into obstacles.

Second, find someone to help you. Check with your local historical society. Odds are good that you’ll find someone who is enthusiastic to help and who knows the right people to talk with.

Third, most or all of the records you’re looking for will be held by your county government. Your job is to figure out which office holds which records. Check if your county has digitized any of the records because then you might be able to access them online.

Fourth, find out who was connected to this land before the U.S. arrived. You can look up treaties and homeland regions with this tool.

Fifth, to identify the first U.S. owner of your property, you can use an online tool provided by the U.S. Department of the Interior. You’ll need to figure out the land description for your property first: your township, range, meridian, and section (ask someone at the historical society or county to help you get this information).

After serving as an educator in higher education for fifteen years, Ben Norquist is now pursuing a PhD with the Higher Education faculty at Azusa Pacific University. His research focus is on higher education systems in settler colonial contexts. Ben’s dissertation is a regional case study of the higher education system in the occupied Palestinian West Bank, with attention to the implications of external pressures as well as internal responses and aspirations. Ben trains college students in design thinking and project management tools and then works with student teams to conduct innovation projects with community organizations around the world.

Five Steps for Researching the (Maybe Racist) History of Your Home

1 of 3
Patent of ownership, awarding land to Thomas Patchell in 1845. This is the land on which my house is built. Plat of subdivision, this document subdivided a larger parcel into a residential neighborhood in the 1940s.Restriction clauses on the plat of subdivision. Includes a racial exclusion clause.