What we can learn from Joshua and Caleb
Leroy Barber 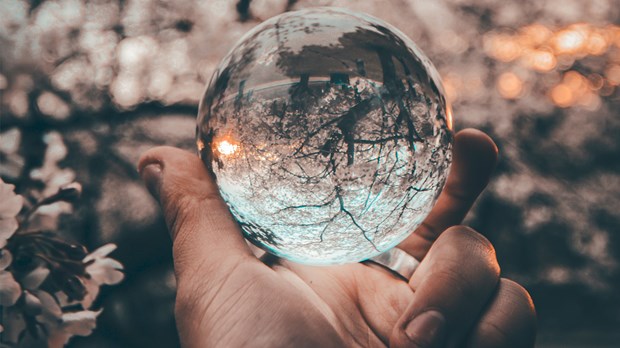 Moses sent spies to the Promised Land to check things out. They brought back a mixed report.

They gave Moses this account: "We went into the land to which you sent us, and it does flow with milk and honey! Here is its fruit. But the people who live there are powerful, and the cities are fortified and very large. We even saw descendants of Anak there. The Amalekites live in the Negev; the Hittites, Jebusites and Amorites live in the hill country; and the Canaanites live near the sea and along the Jordan."

Then Caleb silenced the people before Moses and said, "We should go up and take possession of the land, for we can certainly do it."

But the men who had gone up with him said, "We can't attack those people; they are stronger than we are." And they spread among the Israelites a bad report about the land they had explored. They said, "The land we explored devours those living in it. All the people we saw there are of great size. We saw the Nephilim there (the descendants of Anak come from the Nephilim). We seemed like grasshoppers in our own eyes, and we looked the same to them" (Numbers 13:27-33).

There was a consensus from the spies that the land was indeed wonderful and flowed with milk and honey. The spies even brought back samples to show Moses and the people some proof. But from there the reports differed. Eight of the spies began to talk about the giants that inhabited the land and the walls that fortified the cities; they gave the report that they could not take this land. Caleb and Joshua, on the other hand, thought God could and would give the land to them. The reports differed based on something I call kingdom imagination.

Kingdom imagination combines a few key things to create an outlook based on God's supernatural involvement. First it takes into account the past, where God has been present in past circumstances. Kingdom imagination first considers specific places and situations where God did something miraculous. He may have healed a sick person, provided finances, diminished or deleted an obstacle. Whatever the case, it is a time or place where we know it was God. What has he done before that can be counted on in the present? Some call this a testimony or praise report.

That instance for Joshua and Caleb could have been the manna falling from heaven or the fire leading them by night on the exodus from Egypt. Either of these (or various other experiences of God's care and concern) could serve as proof that God was indeed able to do something amazing. Whatever it was for Caleb and Joshua, the other spies left that level of praise out of their report.

Kingdom imagination also sees past present circumstances. Kingdom imagination is able to see possibility in the midst of present obstacles, hope through despair. It relies on the vast resources of God and speaks boldly of future reality as if it were present. The kingdom imagination is not arrogant but bold—bold enough to speak openly about things that haven't happened yet. Caleb quiets the crowd and declares, "We can take this land." Caleb is just not a crazy or naïve person here; he is, rather, a bold follower of God, and his kingdom imagination gives him the courage to speak out about what he believes God can do. He speaks it, and he stands by it—even though he is in the minority. He doesn't hold merely a minority opinion, however; Caleb isn't debating the readiness of the Israelites but rather acknowledging the power of God. Kingdom imagination isn't a matter of debate; it's a point of view.

Caleb's view, as we witness in Scripture, was not one the people of Israel acted on, and so it is with kingdom imagination. It is a bold view and a prediction that sometimes takes years upon years to materialize. But whether it is realized in the short term or far into the future, kingdom imagination is usually present in the extraordinary work of God.

Loving God. Loving people. These are the motivations of those inspired by a kingdom imagination. Others may look at their lives and commend them, but loving God and loving people are not always compatible with the "American dream." People who act on a kingdom imagination might be mocked or excluded; they might even be hated by whole groups of people. But that's irrelevant to them, just as Israel's rejection of their report was irrelevant to Caleb and Joshua.

The drivers of popular society—fame, wealth, attention, and praise—have no place in a kingdom imagination, and they cannot sustain the challenges that may cross your path while following Christ with abandon. Any motivations short of seeking to honor God and serve others in everything you do will not sustain such a journey.

Those living God-inspired lives are in no way super-human, and their lives may lack glamour. They make mistakes, but they admit them and seek restoration. That's because they've encountered God, been inspired with a kingdom imagination, and had their view of the world changed as a result.

Encounters with God deepen our commitment to love him and love others. Those experiences by which we come to know him and are moved to action vary with each person's story. The Bible is full of men and women who find themselves swept into a story bigger than the one they were living—everyday people being transformed in the context of their ordinary lives. Their inspired encounters reveal the unique ways that God can choose to move in our daily lives. Their stories may remind you of moments where God has called and equipped you for something more than the life you are living. Our responses to those encounters make the difference between ordinary and extraordinary.

Leroy Barber is the president of Mission Year, founder of Restoration Ministries in Philadelphia and founding director of Atlanta Youth Academies.