When we're thankful, we gain so much more.
Stan Guthrie 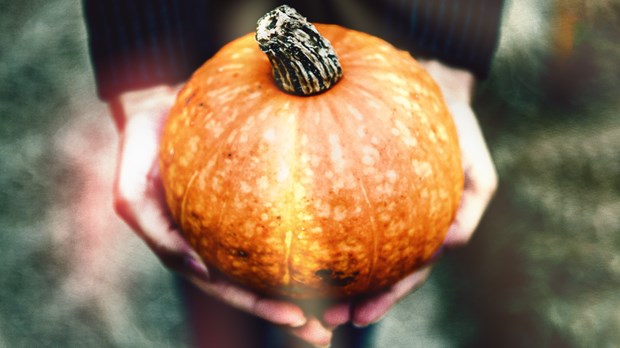 One day Jesus encountered thanklessness while traversing what Puritan commentator Matthew Henry calls "the frontier-country, the marches that lay between Samaria and Galilee." The story is found in Luke 17.

Now on his way to Jerusalem, Jesus traveled along the border between Samaria and Galilee. As he was going into a village, ten men who had leprosy met him. They stood at a distance and called out in a loud voice, "Jesus, Master, have pity on us!"

Jesus is called aside by the plaintive shouts of men afflicted with a serious skin condition that present-day translators render as leprosy. Surely, they must have thought, if Jesus could cure the blind, heal the lame, and raise the dead, he had the power to help them too. They were already outcasts and had nothing to lose, so they raised their voices in desperate hope.

When he saw them, he said, "Go, show yourselves to the priests."

The Master simply tells them to go to the priests, who were the first-century referees as to whether a healing had taken place. Any cure, according to the Book of Leviticus, would need the equivalent of a "Good Housekeeping Seal of Approval" from the priests so that the formerly unclean could be ritually restored to the community.

Will they go? How can they, because Jesus has done nothing outwardly to assure them of a cure? "This," Henry notes, "was a trial of their obedience." How would they respond to the Lord's ambiguous command? Something in the reputation of Jesus, or perhaps in the way he looked them in the eye, encouraged them to believe that they had met not divine indifference, but God's mercy, on the road.

And as they went, they were cleansed.

Note the progression: "as they went, they were cleansed." The obedience precedes the healing.

One of them, when he saw he was healed, came back, praising God in a loud voice. He threw himself at Jesus' feet and thanked him—and he was a Samaritan.

Until this point, the 10 lepers had acted in concert: they had lived together, they had cried out together, they had gone off together, and they had been cleansed together. Now, however, one peels off like a jet leaving formation and heads for Jesus. Whatever has happened, the man knows he has been blessed, and the blessing requires a response. First he sees, then he turns, then he praises.

And then, with the Samaritan still humbly at Jesus' feet, come three pointed, rapid-fire questions, which cast a shadow over the celebration.

Jesus asked, "Were not all ten cleansed? Where are the other nine? Has no one returned to give praise to God except this foreigner?"

I must confess: these questions have always bothered me. At first blush they seem to reflect a childish need for praise and recognition on the part of Jesus. Why did he need to be thanked?

Though he already had rewarded their obedience, he wanted something more. He sought their gratitude. "Gratefulness," Richard Emmons notes, "is a knowing awareness that we are the recipients of goodness."Didn't these nine men know what God had done for them?

The nine who did not give thanks were not only rude, they were ignorant, misaligned with the truth of the universe. We are the recipients, not the creators, of goodness. In acknowledging this simple truth, we ennoble ourselves. "God," John Piper says, "is the one Being in all the universe for whom seeking his own praise is the ultimately loving act."

Given that fact, praise is not an option. It is a joyful inevitability in a world designed and upheld by God. The only question is whether we will add our voices to the choir.

Then he said to him, "Rise and go; your faith has made you well."

I wonder how the nine felt when the man, rising from his worship, finally caught up with them, telling of his grateful exchange with Jesus. They had missed the opportunity to deepen their elation by giving thanks. Matthew Henry says that the grateful man received more than the other nine because "he had his cure confirmed particularly with an encomium: Thy faith hath made thee whole …. Temporal mercies are then doubled and sweetened to us when they are fetched in by the prayers of faith, and returned by the praises of faith."

Gratitude brings benefits in this world and in the world to come. The nine had their cure; the one who gave thanks had his cure, plus a relationship with Jesus. This Thanksgiving, let's remember that we are all the recipients of God's goodness and remember to praise Jesus, from whom all blessings flow.

Stan Guthrie is a former CT editor. This article is adapted from his book, All That Jesus Asks: How His Questions Can Teach and Transform Us (Baker Books, 2010). All rights reserved. Stan is also author of Missions in the Third Millennium and co-author of The Sacrament of Evangelism.