Taking a stand for the right can cost everything
Eric Metaxas 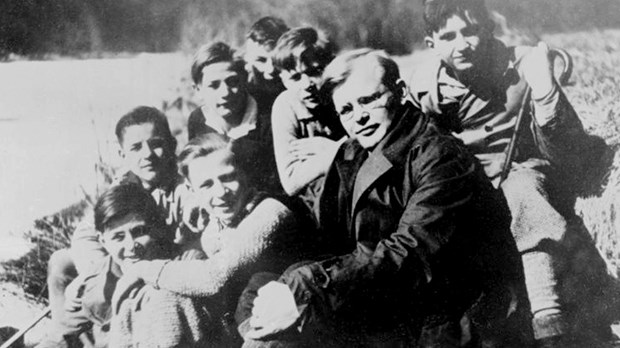 Peace had at last returned to Europe. Her familiar face—once evilly contorted and frightening—was again at rest, noble and fresh. What she had been through would take years to understand. It was as though she had undergone a terribly protracted exorcism, one that had extracted from her the last farthing. But in the very end, protesting with shrieks as they went, the legions of demons were driven out.

The war had been over for two months. The tyrant took his own life in a gray bunker beneath his shattered capital, and the Allies declared victory.

Slowly, slowly, life in Britain turned to the task of restoring itself. Then, as if on cue, summer arrived. It was the first summer of peace in six years. But as if to prove that the whole thing hadn't been a dream or a nightmare, there were constant fresh reminders of what had happened. And they were as awful as anything that had gone before. Often they were worse. In the early part of this summer, the ghastly news of the death camps emerged along with the unfathomable atrocities that the Nazis had visited upon their victims in the hellish outposts of their short-lived empire.

Rumors of such things circulated throughout the war, but now the reality was confirmed by photographs, newsreel footage, and eyewitness accounts from the soldiers who liberated the camps in April during the last days of the war. The depth of these horrors had not been known or imagined, and it was almost too much for the war-fatigued British public to absorb. Their hatred of the Germans was confirmed and reconfirmed afresh with every nauseating detail. The public reeled at the very evilness of the evil.

At the beginning of the war, it was possible to separate the Nazis from the Germans and recognize that not all Germans were Nazis. As the clash between the two nations wore on, and as more and more English fathers and sons and brothers died, distinguishing the difference became more difficult. Eventually the difference vanished altogether. Realizing he needed to fuel the British war effort, Prime Minister Winston Churchill fused the Germans and the Nazis into a single hated enemy, the better to defeat it swiftly and end the unrelenting nightmare.

When Germans working to defeat Hitler and the Nazis contacted Churchill and the British government, hoping for assistance to defeat their common enemy from the inside—hoping to tell the world that some Germans trapped inside the Reich felt much as they did—they were rebuffed. No one was interested in their overtures. It was too late. They couldn't participate in such evils and, when it was convenient, try to settle for a separate peace. For the purposes of the war effort, Churchill maintained the fiction that there were no good Germans. It would even be said that the only good German—if one needed to use the phrase—was a dead German. That lack of nuance was also part of the hellishness of war.

But now the war was over. And even as the full, unspeakable evil of the Third Reich was coming to light, the other side of things had to be seen too. Part of the restoration to peacetime thinking was the ability to again see beyond the blacks and whites of the war, to again discern nuance and shades, shadows, and colors.

And so today in Holy Trinity Church—just off the Brompton Road in London—a service was taking place that was incomprehensible to some. To many others it was distasteful and disturbing, especially to those who had lost loved ones during the war. The memorial service being held today on British soil and being broadcast on the BBC was for a German who had died three months earlier. The word of his demise so slowly staggered out of the war's fog and rubble that only recently had any of his friends and family learned of it. Most of them still knew nothing about it. But here in London were gathered those few who did.

In the pews were the man's 39-year-old twin sister, her half-Jewish husband, and their two girls. They had slipped out of Germany before the war, driving at night across the border into Switzerland. The dead man took part in arranging their illegal flight—although that was among the most negligible of his departures from National Socialist orthodoxy—and he helped establish them in London, where they settled.

The man counted among his friends a number of prominent persons, including George Bell, the bishop of Chichester. Bell arranged the service, for he had known and loved the man being honored. The bishop met him years before the war when the two were engaged in ecumenical efforts, trying to warn Europe against the designs of the Nazis, then trying to rescue Jews, and finally trying to bring news of the German resistance to the attention of the British government. Just hours before his execution in Flossenbu¨rg concentration camp, the man directed his last words to this bishop. That Sunday he spoke them to a British officer, who was imprisoned with him, after he performed his last service and preached his last sermon. This officer was liberated and brought those last words and the news of the man's death across Europe with him.

Across the English Channel, across France, and across Germany, in the Charlottenburg district of Berlin, in a three-story house at 43 Marienburger Allee, an elderly couple sat by their radio. In her time the wife had given birth to eight children, four boys and four girls. The second son had been killed in the First War, and for a whole year his young mother had been unable to function. Twenty-seven years later, a second war would take two more boys from her. The husband was the most prominent psychiatrist in Germany. They had both opposed Hitler from the beginning and were proud of their sons and sons-in-law who had been involved in the conspiracy against him. They all knew the dangers. But when the war at last ended, news of their two sons was slow to arrive in Berlin. A month earlier they had finally heard of the death of their third son, Klaus. But about their youngest son, Dietrich, they had heard nothing. Someone claimed to have seen him alive. Then a neighbor told them that the BBC would the next day broadcast a memorial service in London. It was for Dietrich.

At the appointed hour, the old couple turned on their radio. Soon enough the service was announced for their son. That was how they came to know of his death. As the couple took in the hard news that the good man who was their son was now dead, so too, many English took in the hard news that the dead man who was a German was good. Thus did the world again begin to reconcile itself to itself.

The man who died was engaged to be married. He was a pastor and a theologian. And he was executed for his role in the plot to assassinate Hitler. His name was Dietrich Bonhoeffer.

Adapted from Bonhoeffer, by Eric Metaxas. Used by permission of Thomas Nelson, Inc. (2010).