The first shall be last, and the last, first.
Ken Barnes 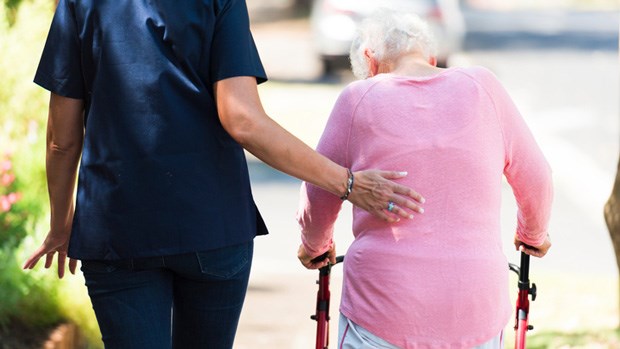 The mother of James and John, the sons of Zebedee, respectfully approached Jesus. She had a small request for Jesus. "Grant that one of these two sons of mine may sit at your right and the other at your left in your kingdom" (Matt. 20:21). It sounds like a typical Jewish mother's request ("My boys are good boys!"). She wasn't asking much, only that one could be the assistant Savior and the other the associate Lord. Jesus must have thought that he had heard it all now.

Jesus replied in a straightforward fashion, "You don't know what you are asking! Are you able to drink from the bitter cup of suffering I am about to drink?" James and John chime in, "We can" (v. 22). Their response proves they are pretty clueless.

The other ten disciples get wind that mama has been politicking for the "Sons of Thunder." The disciples start to make some noise of their own. "When the ten heard about this, they were indignant with the two brothers"—probably because they also wanted those positions (v. 24). Pride and vanity have a tendency to bring to the surface more pride and vanity. So we see the picture—all the disciples jockeying for position, working one-upmanship. They were a pretty ratty bunch.

Talk about a teachable moment. Jesus, the master teacher, was not going to miss this opportunity. But Jesus called them together and said, "You know that the rulers in this world lord it over their people, and officials flaunt their authority over those under them. But among you it will be different. Whoever wants to be a leader among you must be your servant, and whoever wants to be first among you must become your slave" (v. 25-27, NLT).

What a paradigm change! I wish I had been there to see the look on their faces. He had just described to them an upside-down leadership style. If you want to be a leader, become a servant; do what others are not willing to do. If you want to be first among the leaders, become a slave (a bond servant), not embraced with a legalistic obligation, but born of a free choice motivated by love. In this commitment there was no free agency; it was a lifetime of voluntary indentured service.

Remember, the Pharisees, the religious leadership of the day, modeled a different kind of leadership. They loved the best place in the synagogue. They loved to be noticed in the market place and for others to recognize them and say, "Hello, Rabbi." The disciples must have been tempted to think that when their movement succeeds, it would be nice to occupy the best seats and to be noticed by the people. But after this little discourse by Jesus, they might have been thinking, Maybe I should rethink this leadership thing.

Finally, Jesus reveals to them the hinge that would support this radical service. That hinge would be the willingness to give up their lives. "For even the Son of Man came not to be served but to serve others and to give his life as a ransom for many" (v. 28). At the core of all authentic service is a relinquishment. No, for most of us it will not be our physical lives, but in true service there is always the aspect of giving up what we want in order to do what he wants. How did this teaching go over with his disciples? Let's fast-forward to the end of Jesus' ministry on earth to answer this question.

The scene is the last Passover meal that Jesus would share with the men he had picked to carry on his work here on earth. He knows their hearts and understands that they have a long way to go to apply his truth to their lives. He needed an object lesson that would demonstrate the leadership principles previously outlined. His disciples had been with him three and a half years. They had watched him raise people from the dead. He had touched people's mouths and the mute spoke. Ears were opened and the deaf began to hear. They were amazed as the seas obeyed him. Yet, it hadn't brought the change in their lives the Lord had sought. He needed a secret weapon that would not only change them, but also be a tool to reach the world. This was the last interaction with his disciples to etch upon their minds the image by which he was to be remembered. What would it be?

"Before the Passover celebration, Jesus knew that his hour had come to leave this world and return to his Father. He had loved his disciples during his ministry on earth, and now he loved them to the very end. It was time for supper, and the devil had already prompted Judas, son of Simon Iscariot, to betray Jesus. Jesus knew that the Father had given him authority over everything and that he had come from God and would return to God. So he got up from the table, took off his robe, wrapped a towel around his waist, and poured water into a basin. Then he began to wash the disciples' feet, drying them with the towel he had around him" (John 13:1-5).

Jesus takes a common towel and washes the disciples' feet. That night he must have shaken Hell. Demons must have shuddered when they pondered what would happen if this mindset replaced the mentality of the world—this system of the world that is under the "control of the evil one" (1 John 5:19), which says you are important according to position, possessions, or posture in life. Jesus blew a hole right in the center of this mentality by the most valuable taking the role of the least valuable.

I worked with Youth with a Mission (YWAM) for 17 years, 8 of those in Kona, Hawaii, where Loren and Darlene Cunningham, co-founders of YWAM, lived. On several occasions I heard Darlene say that God had called her to be a "footwasher to the footwashers." When Loren needed to be away to take care of the vast responsibilities God had given him, Darlene was home taking care of the children, always with a positive attitude. I watched her spend untold hours counseling and encouraging those of us who were called to minister. We needed encouragement. Being logistical workers and not directly reaching the lost, we sometimes viewed ourselves as second-class missionaries. Darlene encouraged us by speaking worth and value into our lives both in relation to who we were and what we did. Through her life and example, she helped us esteem the high position of service to which God had called us. Like Jesus, she was willing to humble herself to lift others up.

I think we might be a bit surprised when God gives out rewards for our earthly deeds (Matt. 16:27). We might find high on his list of tasks, child-rearing responsibilities, washing socks, or championing others even though it placed us out of the glow of the limelight. I would not be the least bit surprised if on that day we have some shocked people when they finally realize that in serving God, it is not the height of the task or even its breadth that impresses God. It is the depth of our love for Christ—the motivation for our service—which catches the eye of our Father.

Ken Barnes is the author of The Chicken Farm and Other Sacred Places (YWAM Publishing).