What is the difference between patriotism and nationalism?
Ryan Hamm 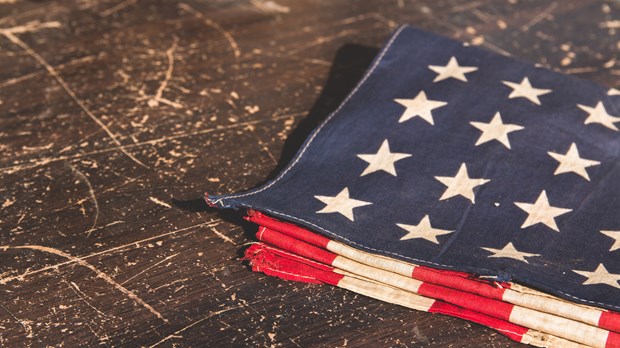 For American Christians, there might not be an issue more complicated or wrapped in history and politics than patriotism. Even saying the word patriotism in a gathering of Christians is likely to garner as many responses as there are people. A love for one's country is looked on with both reverence and revulsion by Christians … and both sides seem to have good reasons. So how ought Christians to think about patriotism? Is there a Christian response to patriotism? And how can faithful Christians hold in tension their love for country and their primary love and commitment to the kingdom of God?

First, it's important to make a distinction between patriotism and nationalism. It's a distinction that's been blurred (and blurred often), but it's a helpful one.

Nationalism, on the other hand, takes that love of country and expands it to mean love of country at the expense of other nations. It's when someone believes they are better because they come from a particular place, or that someone else is less valuable because of the country that issued their passport. In the United States, it's often given the innocuous sounding title "American exceptionalism"; sometimes this term means a very good patriotism that is grateful for the gifts bestowed on American citizens, but too often this means treasuring American identity at the expense of others. It's saying, "My country is better than yours, and you are less civilized/enlightened/good because of where you are from." There are ways to say, "The nation that you belong to should consider adopting some of my country's freedoms" without it being nationalism. But nationalism never considers what one's nation could learn from others.

It's not just Americans who struggle with nationalism, of course. Most nations do. And it wasn't a foreign (no pun intended) problem in the New Testament church. There's a reason Paul writes repeatedly about the need for the Jews to recognize the full participation of Gentiles in the kingdom of God. The Jews' national and religious identity made it difficult for them to understand how a Greek, Ethiopian, or slave from Asia Minor could be just as much a part of God's new work. But Paul's famous assertion that there is "neither Jew nor Gentile, neither slave nor free, nor is there male and female, for you are all one in Christ Jesus" (Gal. 3:28) demonstrates that nationalism must never be part of the new kingdom of God.

A Good Kind of Patriotism

So how, then, should Christians distinguish between patriotism and nationalism? Well, as in most things, it's best to know what Jesus did.

In Luke 19, there's a peculiar story about Jesus. In the midst of the pomp and glory of the Triumphal Entry into Jerusalem, Jesus begins to weep. He weeps because the city-and, by extension, all Israel—failed to recognize his lordship, and because he knew the impending destruction of Jerusalem. The scene echoed a previous lament over Jerusalem (Luke 13:31-35), where Jesus said, "How often would I have gathered your children together as a hen gathers her brood under her wings, and you were not willing!" (v. 34, ESV).

Jesus, it seems, loved his people, his city, his nation—so much so that he cried over it (and note that it wasn't just because one of Israel's swimmers had just taken Olympic gold!). He didn't despise his country or wish ill upon it—instead, he wanted nothing but the best for it, and it grieved him to see how his people had rejected his teachings.

Jesus' example of patriotism perfected can provide a guidepost to Christians. It's an example that's both pragmatic and romantic, shot through with justice, truth, and love. It's not a nationalistic patriotism—it's a love for nation that doesn't pit it against other nations. Instead, it's a recognition of love followed by a mournful recognition of shortcomings.

If we apply Christ's words to today, it might mean that we celebrate the times our nation does something great—the times it gives a voice to the voiceless. It doesn't mean we totally deny a love or appreciation for our country, or throw up our hands feeling we can't make it better. Like it or not, we're part of whatever community into which we're born, and proper patriotism takes note of the in-born love many of us have along with a desire to make our home nations as good as they can be. Christ's words mean we embrace a healthy love for country and don't diminish the godly notion that it's okay to love the place from which you come.

But Jesus' lament also means we mourn the times when our nation does something wrong. It means tempering our love for country with the knowledge that there are times our countries will get it wrong. Because if you look just under the pomp of most nations, there are some pretty ugly wounds.

G. K. Chesterton sums up this stance perfectly in The Defendant. " 'My country, right or wrong,' is a thing that no patriot would think of saying except in a desperate case," Chesterton writes. "It is like saying, 'My mother, drunk or sober.' No doubt if a decent man's mother took to drink he would share her troubles to the last; but to talk as if he would be in a state of gay indifference as to whether his mother took to drink or not is certainly not the language of men who know the great mystery." In other words, true, good patriotism lies in the ability to judge one's nation in its successes and its shortcomings.

Perhaps the most important distinction to be made by Christians is that our first love must be the kingdom of God, over and above any love of country, no matter how pure and honorable that love might be.

It's easy for Christians to begin to worship their country as an idol. In The Four Loves, C. S. Lewis puts the matter quite succinctly. He notes that love of country "becomes a demon when it becomes a god." In short, we can too easily allow our celebration of nation to intertwine with and pervert our love of God, and in many cases, usurp our love for God. We see how humanity has twisted almost every gift of God into an idol that can sinfully replace him. Money, sex, work, food, drink—each of these (among others) have become damaging idols for too many Christians. It wouldn't take long for any of us to think of examples of when Christians have placed love of country above love of God—and what disastrous consequences this has had.

Therefore, the Christian's primary allegiance is to God and to his church—which sometimes means the Christian patriot must disagree with her country and do things which might be counterintuitive to "civic duty." It might mean engaging in civil disobedience over issues like abortion or torture. It might mean calling for the righting of past wrongs and the upholding of religious freedom. Christian responsibility always trumps patriotism, even when it seems uncomfortable.

Jesus taught us that loving one's country is a godly thing. But Jesus also died for people of all nations—putting his own nation's interests below the needs of every person. To the people of Israel, this might have seemed lunacy—Jesus was betraying his own people by spreading his message to Gentiles. But the example stands tall to us. Jesus asks that we lay all of our loves—including our love of country—at his feet so that we may grant him the first fruits of our love.

When Christians put love of country below love of God and love of Christian brothers and sisters, we see a glimpse of the future God has promised his church. John's vision in Revelation includes this stunning scene:

After this I looked, and there before me was a great multitude that no one could count, from every nation, tribe, people and language, standing before the throne and before the Lamb. They were wearing white robes and were holding palm branches in their hands. And they cried out in a
loud voice: Salvation belongs to our God,
who sits on the throne,
and to the Lamb." (Revelation 7:9-10)

"Every nation, tribe, people and language." It's an image of Christians crying their allegiance to God and to one another over and above any allegiance to country. It's a reminder that we can do the same, even now.

Ryan Hamm is a writer living in Orlando, FL, where he lives with his wife, spends as much time at Disney World as you would expect, and is at work on his first book. You can find him on Twitter @RyanECHamm.