A Community of the Broken

A young organization models what it might mean to be the church in a suffering world.
By Christopher L. Heuertz 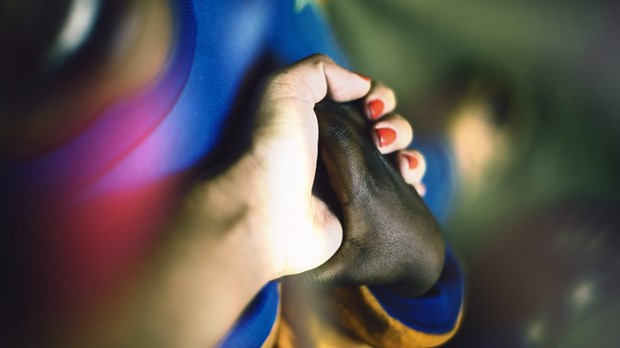 Several years ago, I made my first trip to Freetown, Sierra Leone, just as that country's civil war was winding down. One of my first stops was a camp for the war wounded.

During the war, nearly 250,000 people had their arms or legs amputated by rebels, militia groups, or government soldiers. The mutilations killed the great majority of victims. But a few survived: Those who had the presence of mind to run to safety with their bleeding stumps lifted above their heads to avoid fatal blood loss.

Late in the day, I found myself on the front step of a young woman's slum-like camp home. She looked able-bodied and healthy. Yet her story was as terrible as each of the others'—her village had been attacked, her home burned to the ground, and her husband killed before her eyes. Finally, she had been brutally raped.

As she was speaking, I looked over my shoulder to see her 3-year-old daughter, Grace, picking up a handful of peanuts with one hand. As a 2-month-old baby, Grace had lost her left arm just above the elbow to the same men who had already taken everything from her young mother.

Grace was biting on the shell of a peanut, pressing it against what was left of her arm, to no avail. As a full-grown man with all my limbs, I still have trouble opening a peanut. Grace was trying to do the same without an arm.

An essential Christian conviction is that the church is the community that anticipates and seeks to express the kingdom of God. To explain the healthy functioning of the church, the apostle Paul twice turned to the metaphor of a human body, equipped with many different parts, that working together could live out the life of its risen Lord, the head of the body, in a broken world.

But the body of Christ, far from being a healthy, functioning body with the capacity to respond to the needs of the world, is more like a child who is missing a limb. We are fragmented, divided, and ineffective at even simple tasks. Yet, like Grace, some of us are young, foolish, or brave enough to try to overcome these limitations.

That has been the goal of Word Made Flesh (WMF). Our community can be found in the sewers of Eastern Europe meeting with children living on the streets, with former child soldiers in the refugee camps of West Africa, among victims of sex trafficking and children with aids throughout Asia, and in the shanty-towns and favelas of South America.

It's often observed that there is among my generation a crisis in the theology and practice of mission. For many Christians today, mission can seem to be little more than sanctified tourism. Raised as opportunistic individuals, we bounce from one short-term experience to the next. We keep our options open and avoid committing to any one organization or set of relationships—so much so that many of us would rather work 20 hours a week pouring coffee than give our lives to helping secure safe drinking water for others.

The challenge for WMF is working with those who are intelligent yet doctrinally confused, lonely yet community-resistant, cause-driven yet commitment-averse, idealistic yet cynical, magnanimous yet suspicious, and, not least, over-educated yet deep in debt—and challenging them to establish community with and among the oppressed of the world.

A Community of the Broken