What I learned while visiting a mental health facility.
Tyler Charles 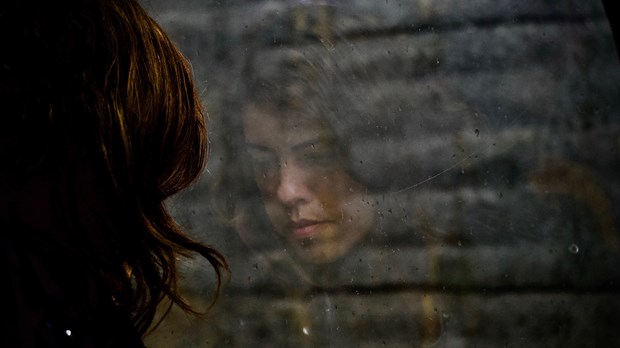 The large door labeled "Mental Health" stood at the end of the hallway. Maybe it really was ominous, or maybe it was just my imagination, but I took a deep breath before pressing the black button beside the door, fully aware that a camera was trained on my face and that someone—somewhere—would be scrutinizing me.

"Yes?" a woman's voice emerged from a speaker beside the door.

"Yeah, I'm here to see Paige" (names have been changed). I tried to sound confident, as if I'd done this a million times—or at least once—before. "I'm, uh, her campus minister."

I heard a buzz as the outer door unlocked. Cautiously, I pulled the door open and stepped inside.

I'd been a campus minister for roughly seven months. The previous summer I'd sat in a classroom taking notes during the Coalition for Christian Outreach (CCO) New Staff Training. As extensive as those weeks of training had been, they hadn't quite prepared me for this. Not for official visits to a mental health facility. Not for Paige.

After being admitted through both sets of locked doors, what I found inside was … exactly what I expected. This mental health unit (the first I'd ever entered) looked just like every facility I'd seen portrayed in a movie or TV show: white walls, blank faces, a patient sitting alone and murmuring (and occasionally weeping), people walking laps in the hallway, pills dispensed in little cups by a nurse behind a counter, group therapy sessions, and a noticeable absence of belts and shoelaces.

I signed in at the counter where the pills were dispensed, but I had to wait for a few moments before I could see Paige. As I loitered by the counter, trying to pretend like I belonged, one of the patients—a middle-aged woman—approached me from behind. "Are you the pastor?"

Campus minister? Yes. Pastor? No, not really. But that's not what I said. Before I knew it, I was saying, "Um, yeah. That's me." (I suppose this is what I get for parking in one of the two spaces reserved for "Clergy Parking.")

She bowed her head.

I didn't ask Dorothy how to pray for her. Maybe I should have. But then again, when someone is a patient in a mental health facility, the answer to that question might be somewhat obvious.

So I bowed my head and asked God to give Dorothy peace, and I prayed that she would know how much God loves her. I concluded with a tentative "Amen." She thanked me, and then she wandered off. (I would visit Paige regularly for the next week, but Dorothy and I never spoke again.)

Paige had emerged in the hallway during my prayer session with Dorothy, but she hadn't wanted to interrupt. After Dorothy left, Paige gave me a hug. Hugs became a regular thing during that week. We usually hugged when I got there, and we always hugged before I left. For almost 30 years, I'd never been the kind of guy who initiated hugs. But that's one of the ways I changed during that week. Because I think she needed the hugs.

And I know I did.

My relationship with Paige dated back roughly six months—when she was, in fact, one of the first college students I met on campus. One morning she plopped down near me in the student center, and, after answering a couple of my questions, she launched into her faith journey—which had been derailed somewhat abruptly when she walked away from God the previous spring. She was very aware of her lack of faith—or at least her lack of answers—and that was one of the most beautiful things about her: that she wasn't content with this uncertainty. From the day I met her, Paige was relentlessly diligent in her pursuit of answers.