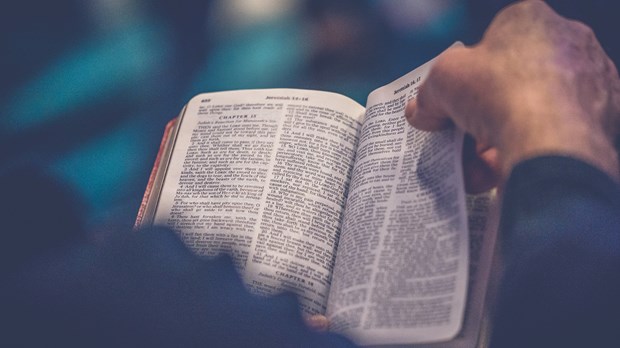 Steve was a house painter from England vacationing at a beach in the Philippines with his family. I happened to be staying at the same resort. One day during a conversation that began to turn toward spiritual things, Steve said, "I've talked to numerous religious leaders but they've never been able to answer my questions satisfactorily. So I've given up on religion and am trying to live a good life."

"What were your questions?" I asked.

"The main one is, why is the world so unfair? Why is there pain and suffering and why doesn't God, if there is a God, do something about it?"

"Could I have a go at sharing something I've learned about these things using a story from the Bible?" I asked.

"I don't believe the Bible."

We started with Genesis 1 and God's intentions for his world. The story concluded, "Then God said, 'Let us make people in our image. He made a man out of the dust of the earth and God breathed his spirit into the man. So Adam became a living being. Later God put Adam to sleep and took one of his ribs and made a wife, Eve, for him. God said, 'Rule over the animals … multiply and fill the earth.' Finally God looked at everything he had made and blessed it. He said, 'It is very good.' On the seventh day God rested from his work because he had completed the work of creation."

Soon Steve's two children and his son's girlfriend casually drifted over to listen. I filled them in on the story so far and continued by explaining the beginning of pain and trouble in the world from Genesis 3. I mentioned the story's strange hint of hope when God says to Adam and Eve, "The snake and the descendants of the woman will be at war. The snake will strike her descendant's heel, but one day a descendent will crush the head of the snake."

During the discussion one of my listeners said, "I know you're going to say that Jesus is the one coming to crush the snake's head, but how will he do it?"

"Can I tell you a few more stories before Jesus?" I replied. "That will make everything clearer."

So we continued on through the stories of Abraham, the exodus and the rest of the Old Testament. Each story set up the one that followed it so my audience would understand the nature of the human problem and how desperately we needed a Savior. My listeners peppered me with questions, and we discussed them one by one. Most often I asked them a question in return, and they found themselves answering their own questions based on what they'd already learned. Sometimes I said, "That will be answered in an upcoming story."

Finally, after about an hour, we reached the end of the Old Testament. "Come on," they begged. "Don't leave us in suspense. Tell us how Jesus saves!"

Outside our open-air dining room, the beach beckoned. It was a perfect day for snorkeling, and this family had come from winter-bound England to play in the sun. Their holiday was almost finished—but today the beach might as well not have existed.

We continued through Jesus' birth and ministry. Finally we reached his death and resurrection. "Do you remember what the temple curtain in the Old Testament symbolized?" I asked.

"The separation between God and people," said one.

"What was the only way people could be forgiven and continue to be friends with God?"

"A representative had to prepare himself carefully and then kill a perfect sacrifice and take its blood through the curtain," another responded.

"So what did it mean when the temple curtain split from top to bottom just when Jesus died?"

They started hesitantly, saying, "I guess it means … that because Jesus died … the barrier between us and God has been dealt with." Then they concluded in a rush, "So we can once again be friends with God."

"So Jesus was like that perfect sacrifice," one said.

"Yes, but he was also the representative," chimed in another.

At last I called an end to the storying before we'd exhausted ourselves and lost the joy of discovery. Two days later as the family was departing, Steve said, "I'm going home to find my Bible. If those religious experts had told me such relevant stories, I would have happily gone to their church and wouldn't have given up searching."

How did I get involved with Bible storying? I was a reluctant starter. As a teenager, the child of missionaries, I had heard about chronological Bible storying. My impression was that it was best suited for illiterate tribal peoples. When I became a missionary myself, my context was different. I did church planting with OMF International among working-class people in modern, industrialized southern Taiwan. Nearly everyone could read, although a large portion of the population chose to learn in ways other than via the printed word.

I taught the Bible in a wide range of situations, from one-to-one evangelism and discipling to Bible study groups, training seminars and public teaching. I used many stories to illustrate my teaching. Constant feedback and self-evaluation helped improve my teaching, but I never thought to change my basic communication building blocks.

God obviously had a different plan! In 2004 I observed a six-hour OMF training seminar in which the leader told stories from Genesis to the ascension. I enjoyed the stories personally, but I still didn't think they suited my style. I was already a reasonable communicator and believed it would be a huge challenge to adapt my teaching style. Simply put, change of this magnitude seemed like too much work.

So I learned to tell the creation story with reluctance. The next step was to find someone who would listen to it. I chose a busy photo-developing shop for my first attempt—a decision that, looking back, may not have been wise. I didn't do a particularly good job with the story. And a constant flow of customers meant numerous interruptions.

What astounded me was the response of the hearer. She loved the story and wanted to hear more. Suddenly I was no longer having to initiate gospel conversations. Instead people were asking me to tell them about the Bible. The adventure of a lifetime had started.

The wonderful thing about storying is that it's far more than a quick telling of the good news. We Christians often want our evangelistic methods to be time-efficient and produce guaranteed results. But evangelism should not be hurried. People who have heard and discussed many stories come to Christ more prepared than those who are evangelized in other ways. In one sense, you could say that storying is "discipling people to conversion."

If you're reading this, then you're probably already committed to communicating the gospel in the best way possible. You long to see Jesus glorified, with your family, friends and neighbors part of that crowd rejoicing around the throne (Rev 7:10, 12).

Learning to story is worth the investment in time and energy. I often see hope dawning on people's faces as they're trained in this method. They're delighted to discover that they've found a simple, biblical tool almost anyone can learn.

If you've been frustrated that people don't seem interested in hearing the gospel, you may be amazed at how well storying works. I've found it to be more fruitful and effective than many other approaches to evangelism. It's a natural, appealing way to communicate the gospel, and once you get started, people actually want to hear more. Storying has great potential to help many people come to know God.