The Social, Economic, and Political Commitments of the Early Church

They were all about faith in action.
Brandon J. O'Brien 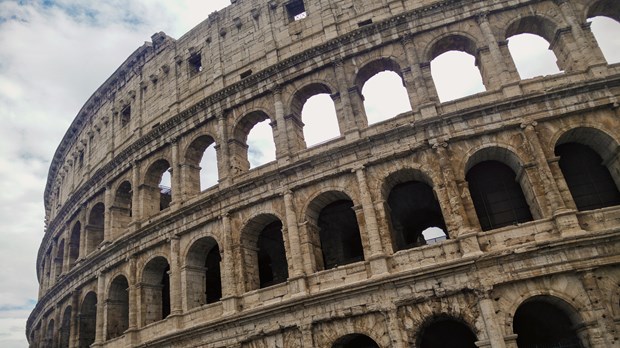 "What answer shall you make to the judge, you who dress walls, but will not clothe a man; who spruce up horses, and overlook an unfashionable brother; who leave grain to rot, but will not feed the starving; who bury your money and despise the oppressed?" It was pastor and theologian Basil of Caesarea who addressed this difficult question to the wealthy members of his congregation in the mid-fourth century. Basil had already put his money where his mouth was when he cashed in his considerable inheritance and built a hospital for the poor and a clinic for lepers. Now he was calling his fellow Christians to do the same.

Basil's example illustrates the radically countercultural commitments of the early Christians. They faced considerable social, economic, and political challenges, many of them very similar to the ones we face today. And they did their best to behave in ways consistent with their understanding of the gospel. Below are just a few examples of how the early church put its faith in action in the public realm.

The early Christians recognized the political implications of the faith.

The earliest Christian confession is recorded in Romans 10:9: "Jesus is Lord." Because we don't typically refer to anyone but Jesus as Lord, we usually understand this passage to be primarily religious in application. Jesus is the one we answer to in spiritual matters and who guides our moral conduct. Because Jesus is Lord, we don't serve other masters—like sin, the flesh, or the devil. But the first-century Roman context was different. In Rome, only Caesar was lord. And lest you forget, messages on billboards and graffiti on buildings were an ever-present reminder. Annually at tax time, the denizens of a city would make their way to the local temple, pay their tax, and proclaim "Caesar is lord." If they didn't make this declaration, they could be executed for treason. Christians knew this, and they took their chances.

Many annual Roman festivals were thinly veiled religious holidays dedicated to Roman gods or even the worship of the Caesar himself. Christians refused to participate in these festivals. This might be analogous in American culture to Christians refusing to celebrate on the Fourth of July or insisting on working on Memorial Day. They wanted to reserve their worship for Christ alone, but their conspicuous absence from these civic festivities marked them as bad citizens (at best) or traitors (at worst). Once they were identified as potential traitors, Christians were feared as a threat to the very fabric of Roman society. This was the primary reason many Christians were persecuted in the church's first few centuries. Despite the political consequences, these first Christians didn't shrink from their bold proclamation—"Jesus is Lord!"

The early Christians experienced ostracism and misunderstanding because of their religious language and practice.

Pliny the Younger was a governor in what is now known as Turkey from A.D. 111-113. In a famous letter to the emperor, Trajan, Pliny describes the worship of the early Christians in this way: "They were accustomed to meet on a fixed day before dawn and sing responsively a hymn to Christ as to a god, and to bind themselves by oath … not to commit fraud, theft, or adultery, not falsify their trust, nor to refuse to return a trust when called upon to do so. When this was over, it was their custom to depart and to assemble again to partake of food—but ordinary and innocent food." This order of worship sounds harmless. But it was these very practices, and the words they used to describe them, that earned the church serious social stigmas. The Christians who met together referred to each other as brothers and sisters, biblical terms for people who are now united in Christ. But this confused outsiders. Sometimes these brothers and sisters married each other, leading the Romans to believe Christians condoned incest. Furthermore, they worshiped Christ as a god, but they denied the existence of the Roman gods. This earned them the title of "atheists" from pagan neighbors, who regarded Jesus as merely a man. Finally, the food they ate together as brothers and sisters was indeed "ordinary and innocent." But, following Jesus' example, they talked about partaking of communion as eating the body of Christ and drinking his blood. This was not seeker-sensitive language! The Romans thought the Christians were incestuous, atheist cannibals. This only fueled their suspicions that the Christians were traitors and menaces to Roman society.

A Truly Simple Life
Though the world tells us we must be, do, and have more, God calls us to be content.
Single Session Bible Study
$4.95

The Social, Economic, and Political Commitments of the Early Church

SmallGroups.com offers a diverse set of adaptable training tools for small group models that can be customized to a church's unique needs.

Theological Discussions for Everyone
A la carte price:
Subscriber price: $0.00