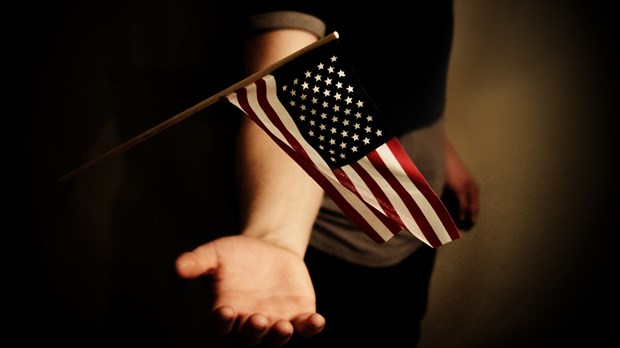 One Sunday morning in college, I attended church with an Austrian friend who hadn't been to many American churches. So after the service, I asked him what he thought of the experience.

"It was fine," he said. I could tell something was troubling him. So I pressed him a bit. Finally he said, "Why was there an American flag by the pulpit?"

Good question. Honestly, though, I hadn't even noticed. Every summer in Vacation Bible School, we pledged our allegiance to the American flag, then the Christian flag, then the Bible. Our church's second largest weekend celebration—after Christmas—was the Fourth of July. Why wouldn't there be an American flag in the sanctuary?

But for him—and I would later discover, for many Christians who are not Americans—the presence of the flag in the sanctuary signals too close a relationship between Christian faith and American patriotism. Is there a danger for Christians, who are citizens of the kingdom of heaven, in putting too much hope in, or having too much affection for, any earthly kingdom?

There are degrees of patriotism. At minimum, the word denotes love, devotion, and a commitment to protect one's country. Surely this is appropriate for all citizens. However, displaying a flag in a worship service implies that there is something inherently Christian about patriotism. And that is a disputed point.

God and Country as Allies

Evangelist Billy Sunday said, "Christianity and Patriotism are synonymous terms, and hell and traitors are synonymous." Many Christians see God's goals and the country's goals as one and the same. Therefore, it is not just a civic duty to love and support America, it is also a Christian duty.

People who hold this view take seriously Paul's teaching on the Christian's relationship to civil government in Romans 13. "Let everyone be subject to the governing authorities," Paul writes, "for there is no authority except that which God has established" (v. 1). Any rebellion or dissent against the government is "rebelling against what God has instituted" (v. 2). The relationship between rulers and citizens seems clear in Romans. The ruler is "God's servant for your good" (v. 4). Thus, to be unpatriotic is to oppose God.

This extreme point of view fails to take into account the historical context of Paul's letter to the Romans and reads into it certain American assumptions. Romans 13 makes a lot of sense in American society. Here we enjoy the Constitutional separation of church and state, which means the government doesn't meddle in religious affairs. We elect our officials to serve us—to do us good. And we can easily think of these civil servants as "God's servants," especially if they are Christians themselves. In fact, we can easily think of our nation as essentially Christian.

This feeling was particularly strong in America from the early 1920s and into the Cold War, when the global threat was communism. Evangelist Billy Graham explained during the historic Los Angeles crusade that put him on the map that the only way America could oppose communism was if it first experienced spiritual revival. But the trouble with linking patriotism and faith too closely is it can lead us to believe that the essence of being a good Christian is being a good citizen. The focus of our discipleship then becomes not spiritual but national, and we begin to view the nation as God's primary way of accomplishing his goals.