Prepare for a Shock

The Resurrection is cause for celebration, but it should always shake us up a little too.
Drew Dyck 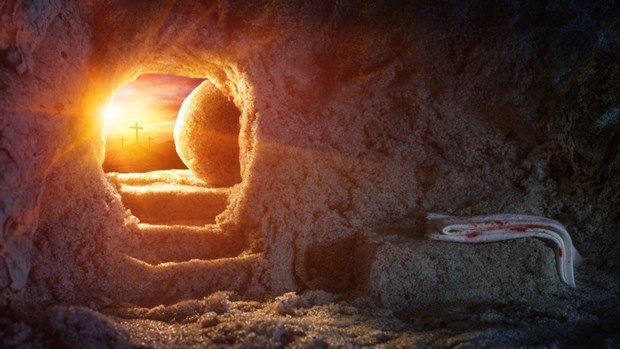 When I was 14, my church did something unusual for Easter Sunday. Instead of meeting in our building, we chose to hold our service on a hill overlooking the city. We wanted to watch the sunrise as we pondered the Resurrection.

Yet when we arrived, we started having second thoughts. The view was beautiful, but it was cold. And our speaker wasn't showing up. Someone wondered aloud if perhaps he had slept in. Eventually we started without him, singing feebly against the horizon as we watched our breath vapors dance in the frigid morning air.

Located on the opposite slope of the hill was the city's cemetery. The moment we finished our last song a figure sprang up from the graves and screamed: "He's alive! He's alive!"

We were startled. It took a few moments to realize that the screaming figure was our speaker and that he was talking about Jesus. His act didn't stop there. He stayed in character, bouncing through the group, waving his arms maniacally. "He has risen! He has risen!"

Once we recovered from the abrupt appearance we were spellbound. He used the dramatic introduction to set up a powerful sermon that I remember to this day. And now, every year when Easter rolls around, I think about the Resurrection a little differently. With Easter coming up (this year it lands on March 23) I want to encourage you to do the same. Yes, the Resurrection is cause for celebration—but it should always shake us up a little too.

For most of us Easter is a leisurely holiday. After special church services children hunt for chocolate bunnies and Easter eggs. It's a safe, fun, family affair.

Not so for those present on the first Easter. From the Gospels we get a glimpse of the confusion, shock, joy and fear that besieged them when they received word that Jesus had been raised from the dead. Mark reports that the women at the tomb were "afraid" and filled with "terror and amazement." Peter, who had denied Jesus, must have been somewhat ambivalent. Thomas was incredulous. The Romans were angry. Whatever the response, the event stirred deep emotion and took everyone by surprise.

But what impact does it have on us today? Sometimes I worry that the nearly 2,000 years of tradition cushions us from the bizarre and beautiful nature of that momentous occasion.

Just think about it. On Friday Jesus lay lifeless in a dark tomb. Three days later a divine torrent of healing power surged through His body and He stood up—then walked back into the world with dried blood on His feet.

So why is it important to behold the Resurrection afresh? Why must we strive to comprehend its stark supernatural nature? Because I believe that a proper appreciation of it is crucial to the vitality of our faith.

The Resurrection has a way of reordering our priorities. Since Jesus conquered death, we have the hope of everlasting life. When we grasp the full import of that truth we begin to evaluate all our actions according to their eternal significance. In the light from the empty tomb, everything looks different.

A full understanding of that great event is also foundational to our witness. It was the Resurrection—not a safe symbol or sleepy allegory—that fueled the evangelistic fervor of the first Christians. And when they marched out to proclaim the gospel, they did so with the assurance that Christ's resurrection foreshadowed their own. It made them fearless in the face of death.

Though many of us may not face the same danger, we need the same courage. That's why we need to stand before the empty tomb amazed. We need to marvel at Christ's dramatic triumph over death and sin. Only after we have beheld the resurrection, in all its shocking power, will our voices rise in that mighty refrain that shakes the gates of hell:

Drew Dyck is managing editor of Leadership Journal and author of Generation Ex-Christian: Why Young Adults Are Leaving the Faith … and How to Bring Them Back (Moody, 2010).

Prepare for a Shock