Is God going to be enough for my hurt?
Christina Gibson 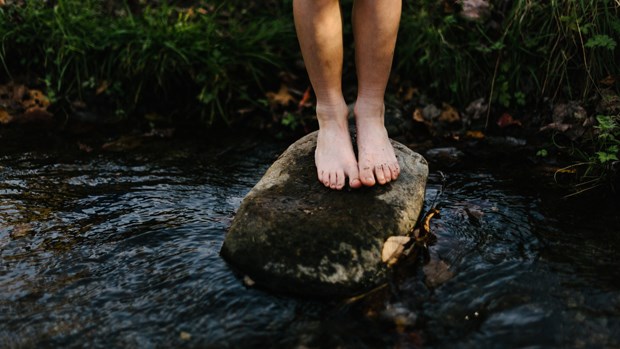 I am an unnervingly present person. I rarely think about the future. I’m too caught up in the now to worry about what has to be done tomorrow. For some reason, pregnancy launched me into a preparatory nightmare. I couldn’t be too equipped. I not only read infant books and “how to keep your kid out of therapy” articles, but I also read books on raising teenagers—just in case my kid walked out of the womb with a driver’s license. But in all my forward thinking, I never thought about having a kid who couldn’t go to Chuck E. Cheese.

Ellia has an illness—the kind where no one really knows what’s wrong. The kind of disorder that only 15 other people in the world have and that affects no one else in the United States.

Ellia stopped walking one day when she was two. The doctors were convinced she was faking, and a nurse put her in a room and told us that we wouldn’t be seen until she stood up and walked. With her kidneys on the brink of failure, she somehow recovered a couple weeks later and learned how to sit up, stand, and walk again.

This fluke illness came back with a vengeance. After a third paralytic episode and several near-death moments, Ellia was diagnosed with an extremely rare, life-threatening genetic disorder. Her skeletal muscle structure can break down when she gets any random, unpredictable illness. She loses muscle function from the neck down and, often, she risks multi-system organ failure. The pain is unbearable. All the doctors can do is offer support care. There is no known cure or treatment, and prognosis is uncertain.

Despite our best efforts, our old-souled five-year-old knows what’s going on. She knows what ICU means. She has asked me to look her in the eye and tell her whether or not she’ll live to be a mommy.

The past few years have been a mixture of the frightening known and the debilitating unknown. I might as well use my parenting books as toilet paper. It has sunk in that no amount of preparation can help traverse these waters.

I don’t always feel completely unprepared. After three years, I’ve become adept at taking an often nightly temperature and checking for leg pain and outsmarting Ellia when she’s afraid to tell me it hurts. I’ve become better at not crying when the IV goes in or when she first sits in her wheelchair. But I’ve never gotten used to the part where I pack the bags to take to the hospital.

It’s an out-of-body experience, light-headedly packing clothes and toys, thinking of what we’re walking into—the pain, her questions about why I can’t make it stop. In some ways, I’ve learned what to anticipate. I know the nurses and doctors who adore Ellia. I know Ellia will want to watch Gnomeo and Juliet 30 times in English and twice in Spanish. But my familiarity with the situation doesn’t eclipse the unknowns. I don’t know if we’ll be there two days or two weeks. I don’t know how her kidneys will respond or if her lungs will collapse and she’ll be intubated. I don’t know how long it will be until she eats or takes a bath or gets to go to the playroom.

When I’m still at home, putting toothbrushes into that stupid bag, I face my own deep fears. I feel so vulnerable when the dread and mystery meet in Ellia’s illness. Both are frightening. It’s frightening to know what kind of pain she’s in. It’s unsettling to think of her lethargy, her emotional distress and mental distance, and my own what-ifs.

And if I’ve learned anything the past few years, it’s this: There is no way we can fully prepare ourselves for pain. You can brace for impact, but you can’t stop it from hurting. Preparing for pain is a waste of time. We’re far better off embracing difficulty instead of paddling against it through cynicism, escapism, or control.

I’m afraid to face the pain because it authors a frightening question: Is God going to be enough? No matter how much this hurts? The question slinks around inside of me despite my efforts to avoid its searing gaze.

The question crawls under my skin, into my heart, moves through my mind. I hear it like a voice in the garden: Did God really say…? It’s a snaky question because it gets in where we can’t reach. It climbs into places of our past, present, and future, demanding that God justify his whereabouts at different points in our lives. It loosens the bolts of faith and certainty, and we’re not always sure how to put our belief back together. But the question only does damage when we’re afraid of it.

Maybe it’s a fair question—a good one, even. What if Ellia can’t eat or her lungs collapse? Is God going to be enough? If we can’t look this question in the face, if we’re too afraid that the act of thinking the question will pull the drain out of our belief, then our faith is no faith at all.

The question is frightening. But if we don’t squarely face the question of God’s ability to take care of us, we’ll not only be incapable of embracing the pain: We won’t be able to fully embrace God.

Looking for the Sacred

For the first year after Ellia’s diagnosis, I refused to embrace the pain or any deep theological questions. I wanted to escape. I wanted to avoid fear and anxiety, even if it meant rejecting the journey. In refusing to embrace the difficulty, it became clear that I was forfeiting the potential to meet with God.

I’ve found that in those positions of flux, in the horrible disappointments, I usually have the greatest opportunity for a sacred encounter. It’s in the places I’m least likely to choose that I often meet with God. I don’t know if it’s because I’m more malleable or if God has a soft spot for suffering. But I do know that when we’re stuck or hurting and our gut instinct is to run out of there as fast as we can, we are probably close to holy ground. It is in the very midst of our pain, the places we hate, and the seasons of life we dread that God’s voice is most clear.

There’s nothing pleasant about the frightening unknown, and there’s nothing great about deep loss and loneliness. Those things are just inevitable. The real gift comes in God’s willingness to turn our biggest challenges into landmark spiritual encounters—the kind of life-changing ones like Jacob’s wrestling match with the angel or Hagar’s conversation with the God who sees.

Questions and pain often hold hands on their way to my soul. It’s up to me whether or not I let them in. Ignoring their knock will not block the hurt or the anxiety. I’ve learned survival requires us to face the known and the unknown alike and to look for the sacred. I don’t want to embrace pain, but I do want to embrace God. I think I’m finally learning to listen—even as I head to the hospital instead of Chuck E. Cheese. I’m learning, as I pack our hospital bags, that God might be saying, “Take off your shoes. You’re standing on holy ground.”