Perspectives on Life and Death

For the believer in Jesus Christ, we do not go out into death and into darkness. Instead, we go home to God.
Haddon Robinson 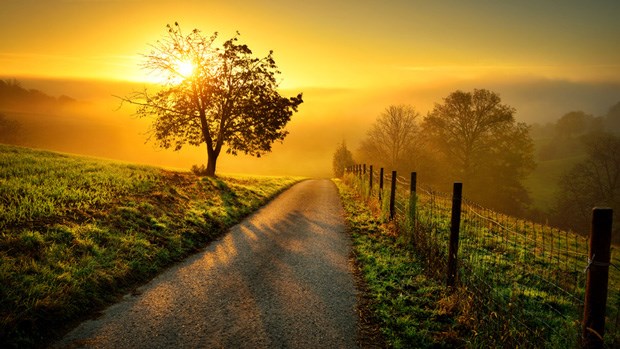 "But man, despite his riches, does not endure; he is like the beasts that perish …. But God will redeem my life from the grave; he will surely take me to himself."—Psalm 49:12, 15

There is a way in which the king is like the lion, the dowager is like the dog, the Mafia boss is like the pit bull, and the farmer like the cow: they all die. They have that in common. But if the dowager, Mafia boss, or farmer dies with no more understanding than animals, then they are no better than the beasts of the field.

To know that after death there is life, after the darkness there is day—well, it changes your perspective. That insight, the psalmist says, can give you wisdom. It can give you understanding.

In literature (and television) a story is told a number of different ways. It is the story of a man who opens a newspaper and discovers the date on the newspaper is six months in advance of the time he lives.

He begins to read through the newspaper, and he discovers stories about events that have not yet taken place. He turns to the sports page, and there are scores of games not yet played. He turns to the financial page and discovers a report of the rise or fall of different stocks and bonds.

He realizes this can make him a wealthy man. A few large bets on an underdog team that he knows will win can make him wealthy. Investments in stocks that are now low but will rise high can fatten his portfolio. He is delighted.

He turns the page, comes to the obituary column and sees his picture and story. Everything changes. The knowledge of his death changes his view about his wealth.

In the monasteries of one order of Trappist monks, the monks dig a grave. Each day the monks go out to stand and look at the grave. When one of their number dies, he's put in the grave, and then a new grave is dug. They do it for perspective.

As unhealthy as that might seem to us, it is far healthier than the way we deal with death in our culture. We avoid it. We disguise it. We talk about it in euphemisms. We go to the cemetery, and the brown dirt is covered by green Astroturf. But the recognition that we will die gives us a different perspective.

Acknowledging death may give perspective, but it doesn't give much comfort. The unrighteous die, but so do the righteous. The atheist dies, but so does the Christian.

In the Hebrew text, verse 12 and verse 20 are identical except for one word. The word that is translated "endure" in verse 12 and the word that is translated "understanding" in verse 20 are virtually the same word except for one letter. Changing the letter changes the word, and changing the word alters the meaning: we are also like beasts if we go to death without understanding.

What is the understanding he has in mind? When life is over, it's not over. When the act is finished, the play goes on. And that cuts both ways.

It cuts one way for the wicked. The psalmist says in verses 13-14, "This is the fate of those who trust in themselves, and of their followers, who approve their sayings. Like sheep they are destined for the grave, and death will feed on them." Psalm 23 says, "The Lord is my shepherd." But in Psalm 49, death is a shepherd—a shepherd who leads a flock to the slaughterhouse and, after the flock is killed, eats the meat. And after he eats the meat, all that is left is bones. This is clear in the personification of death in the New Revised Standard Version, where "Death will feed on them" (NIV) is translated as "Death shall be their shepherd."

Perspectives on Life and Death