What Is Biblical Meditation? 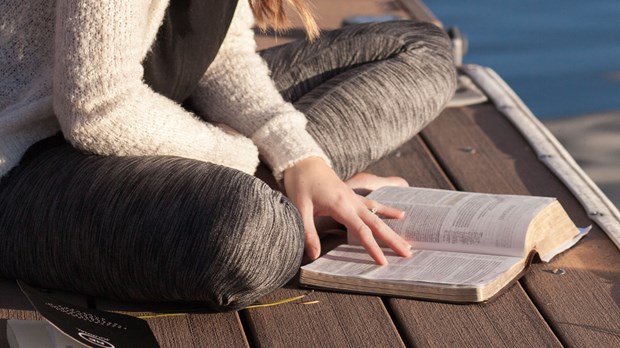 The biblical foundation for meditation is discovered in the great reality of God speaking, teaching, and acting that lies at the center of the scriptural witness. God brought the universe crashing into existence by the word of his command. God said, "Let there be light," and the big bang occurred. In the Garden, Adam and Eve talked with God and God talked with them—they were in communion. Then came the Fall, and in an important sense the experience of perpetual communion was ruptured, for Adam and Eve hid from God. But God continued to reach out to his rebellious children, and in the stories of Cain and Abel, Noah, Abraham, and so many others we see God speaking and acting, teaching and guiding.

Moses learned, albeit with many vacillations and detours, how to hear God's voice and obey God's word. In fact, Scripture witnesses that God spoke to Moses "face to face, as one speaks to a friend" (Ex. 33:11). There was a sense of intimate relationship, of communion. As a people, however, the Israelites were not prepared for such intimacy. Once they learned a little about God, they realized that being in his presence was dangerous business and told Moses so: "Speak to us yourself and we will listen. But do not have God speak to us or we will die" (Ex. 20:19).

This marked the beginning of the great line of prophets and judges, Moses being the first. But it was a step away from the sense of God's immediacy, the sense of the cloud by day and the pillar of fire by night. Then, under Samuel, the people clamored for a king. This disturbed Samuel greatly, but God told him not to be discouraged, for "it is not you they have rejected, but they have rejected me as their king" (1 Sam. 8:7). Under Moses they rejected God's immediacy; under Samuel they rejected God's direct rule. "Give us a prophet, give us a king, give us a go-between so we do not have to come into God's presence for ourselves," they said.

Still, in the fullness of time Jesus came and taught the present reality of the kingdom of God and demonstrated what life could be like in this kingdom. Jesus showed us God's yearning for the gathering of an all-inclusive community of loving persons with God himself at its heart, as its prime Sustainer and most glorious Inhabitant. Jesus established a living fellowship that would know him as Redeemer and King, listening to him in all things and obeying him at all times.

Jesus in his intimate relationship with the Father modeled for us the reality of this life of constantly hearing and obeying. "[T]he Son can do nothing by himself; he can do only what he sees his Father doing, because whatever the Father does the Son also does" (John 5:19). "By myself I can do nothing; I judge only as I hear" (John 5:30). "The words I say to you I do not speak on my own authority. Rather, it is the Father, living in me, who is doing his work" (John 14:10). When Jesus told his disciples to abide in him, they could understand what he meant, for he was abiding in the Father. Jesus declared (and continues to declare to us today) that he is the good Shepherd and that his sheep know his voice (John 10:4). He made it clear that the Comforter would come, the Spirit of truth who would guide his people into all truth (John 16:13).

What Is Biblical Meditation?