This spring the leaders of thirty-four African states assembled in Cairo for a conference of the Organisation of African Unity, to discuss such items as settling border disputes and forming a pan-African army. At a preliminary meeting in Lagos, Nigeria, earlier this year, I talked with some of these delegates. Robed Muslims from Mali opposed French economic aid while business-suited Togolese welcomed it. Ghana’s foreign minister preached Marxist socialism while Nigeria’s talked of attracting capital for private enterprise. Algeria’s white-skinned Arab delegate explained the effects of the European Common Market to the Congo’s ebony-faced official, who talked about combating terrorism. One strange anomaly was a Southern Rhodesian delegate who told me his people would fight if Britain granted independence to his country! They want the white minority to agree first to “one man one vote” elections.

Then up came another delegate who is also a fearless ambassador for Christ. His hearty smile and handshake assured me that even in this “African U. N.,” with its multiplicity of problems, its tensions, and its intrigues, God had his witnesses.

That is Africa today: feverishly seeking unity, plagued by complex diversity—and living through it all is the Church. Before 1950 there were only four independent states in Africa: Ethiopia, Egypt, Liberia, and South Africa. By the end of 1964 there will be thirty-five. One-third of the U. N. General Assembly’s seats are filled today with Africans once represented by half a dozen European powers. Even with such trouble centers as Congo and Angola the revolution has been surprisingly peaceful, with far less violence than in similar transitions ...

Reassessment in Africa
expand
hide this 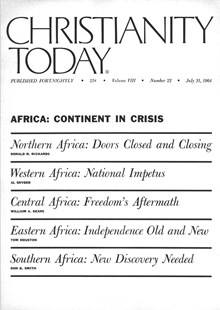 This article is from the July 31, 1964 print issue. Subscribe to continue reading.