Carl F. H. HenryNovember 6, 1970
This article is from the November 6 1970 issue. Subscribers can read all of CT's digital archives.

Given the mind and heart, evangelical Christians could become the most dynamic and decisive minority movement in present American history. They could capture initiative in the social arena, command the attention of the mass media, and confront contemporary man with both a fresh option for personal meaning and worth and an arresting vision of public godliness.

That they are not doing so—except in scattershot fashion—has costly consequences for the secular scene no less than for the Christian churches. For one thing, this neglect condemns modern man to nonevangelical alternatives in the quest for answers and solutions. For another, it adds to the mushrooming mood that the Church has had its day and should be retired as a bit of Victoriana.

However dire may be the trouble of the institutional church, it in no degree matches that of the world. Even the film industry, notes Newsweek, is using apocalyptical themes to exploit the general awareness that things just cannot long continue as they are.

At a conference of executives, scholars, and journalists sponsored in Indianapolis last year by Liberty Fund, a whole afternoon’s discussion turned spontaneously to indications that contemporary man is now groping and fumbling in a civilizational twilight. Professor John Dietze of Johns Hopkins University interpreted the modern turning from a law-based to a positivist-based culture as the lengthened shadow of the French and Russian revolutions. Others saw in the moral pollution of the noble savage, the growing world-wide police power, and the debased currency, incisive reminders of the fall of ancient Rome. Still other warnings are the reaction against rationality and logic even on university campuses, distrust of foundational principles ... 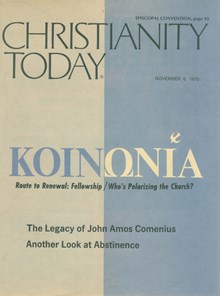 This article is from the November 6, 1970 print issue. Subscribe to continue reading.