September 10, 1976
This article is from the September 10 1976 issue. Subscribers can read all of CT's digital archives.

Ninth in the Series “Evangelicals in Search of Identity”

In the August 6 Footnotes column, Carl F. H. Henry discussed two of four areas where he thinks evangelicals need to work for progress: in recovering the sense of the community of believers, and in presenting a rationale for Christian faith. He deals with the other two areas in this article.

3. We evangelicals must inspire the mass media to portray evangelical realities to the restive world. Satellite radio and television may soon overtake the field. Frontier studies are now under way to determine the possibilities of launching a Christian satellite or of leasing time on already orbiting satellites.

The popularity of television, America’s prime communications medium, far surpasses that earlier enjoyed by the theater, newspapers, and radio; 98 per cent of the people now watch it, many of them almost addictively. Vigorous media engagement is all the more necessary if, as Malcolm Muggeridge contends, television promotes cultural decline by implicitly if not explicitly commending moral permissiveness as the virtue of modernity. No less does the medium accommodate cultural chaos by routinely evading the issue of fixed truth. Like the United Nations, television is far more a forum for spirited presentation of conflicting opinions than a tribunal for promoting discernment of right and wrong.

If evangelicals had launched a major university that included a college of creative and communicative arts to train Christian young people for vocations in writing and editing, radio and television, stage and screen, the Christian message would today enjoy wider and better exposure. Evangelical TV programming still falls largely into the so-called Sunday ghetto. No evangelical group has as ... 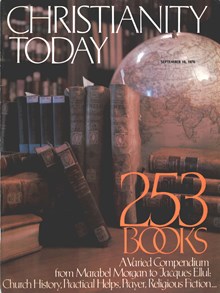 This article is from the September 10, 1976 print issue. Subscribe to continue reading.