Spreading a Table for Fortune

Last month an unemployed hairdresser in Wales won nearly $1.75 million on the football pools. Skill had nothing to do with her accurate forecasting of match results: she knew nothing about the game Americans call soccer.

About $500 million is wagered yearly on the pools in Britain. On legal gambling of all kinds, Britons spend annually at least $6 billion—say $106 for each citizen. At a rough guess the comparable figure for Americans is $275, but wages are just about that much higher proportionately to account for the difference.

Someone has called gambling “the growth industry of the 1970s.” New Jersey legislation permitted casino gambling in Atlantic City, with the result that “property taxes quickly soared in the decaying resort city, and … developers planned to spend more than $1 billion for casino-hotel complexes there during the next ten years” (Encyclopedia Britanica).

In 1948 a Lambeth Conference resolution in England drew attention to “the grave moral and social evils” attendant on large-scale gambling; warned that it frequently led to “the deterioration of character and ruin of homes”; urged that no church organization should profit by it; and deprecated “the raising of money by the State, or by any organization through sweepstakes or similar methods, however good may be the object.”

The government was not listening to the bishops, though twenty-six of them sit in the House of Lords, for in 1956 the Conservative administration introduced Premium Bonds. Customers could buy these at any post office. The principal remained intact and was returnable at any time on application. The interest, after a three-month interval during which the government profited, went into a lottery. Maximum prize: about $2,000. At that time ...

Spreading a Table for Fortune

Spreading a Table for Fortune
expand
hide this 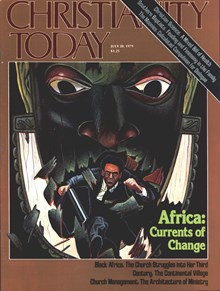 This article is from the July 20, 1979 print issue. Subscribe to continue reading.