November 19, 1990
This article is from the November 19 1990 issue. Subscribers can read all of CT's digital archives.

The defeat of Christian leader Michel Aoun brings Lebanon to “one of the most unsettling and unstable periods in its 15-year history of civil war,” says one veteran observer in the Middle East. Leonard Rodgers, president of Venture Middle East and former Youth for Christ director in Lebanon, is joined by others who agree the “new formula” of power, which places Muslim President Elias Hrawi in control, remains volatile and unpredictable.

Rodgers says Aoun, leader of the Christian forces that opposed Hrawi’s Syrian-backed government for 11 months, had much wider support in Lebanon than was portrayed in the Western media. On one occasion last month, 150,000 backers surrounded Aoun’s headquarters to form a “human shield” to protect the leader from advancing Syrian forces. According to Rodgers, Aoun’s support came not only from Maronite Christians, but also from Muslim and Druse communities (CT, Nov. 5, 1990, p. 41).

Aoun’s backers “will now have to hide to survive,” Rodgers says, “or change alliances.” In spite of support for Hrawi by Syria and Western powers, he has little popularity among the Lebanese people, says Rodgers, who has been in the Middle East since 1963. He predicts the current Syrian domination of the country, enforced by 40,000 Syrian troops, will not bring peace, noting that the Lebanese people have never submitted to occupation.

The “Green Line,” which divides Beirut between the Muslim West and Christian East sections of the city, has been opened at some points. But the city remains a maze of militia-controlled sectors, whose loyalties and rivalries have yet to be demonstrated under Hrawi’s rule, observers report.

Aoun had refused to accept an agreement reached last year in Saudi Arabia that established Hrawi as ... 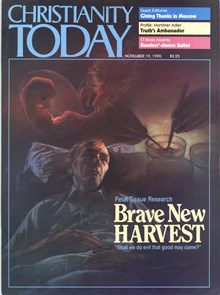 This article is from the November 19, 1990 print issue. Subscribe to continue reading.