December 11, 1995
This article is from the December 11 1995 issue. Subscribers can read all of CT's digital archives.

The Christian Church (Disciples of Christ) in October approved the Church of Christ Uniting (COCU) plan that could formally link nine denominations. A Disciples renewal group is warning, however, that the plan could cause an exodus of both individual church members and entire congregations.

Paul Crow, Jr., president of the Disciples' Council on Christian Unity, called the endorsement of the October 23 covenant communion plan the "most significant ecumenical decision" since the 1832 origin of the 941,000-member denomination. The United Church of Christ (UCC) adopted COCU in July, and the United Methodist Church and Presbyterian Church U.S.A. will discuss the plan next year.

Kevin D. Ray, executive director of Disciple Renewal in Lovington, Illinois, says COCU moves the Indianapolis-based Disciples of Christ from its historic and biblical roots. At the Pittsburgh assembly, Disciple Renewal, an independent conservative organization that receives financial support from 300 congregations, issued the Pittsburgh Proclamation, which contends COCU could force the denomination to accept infant, nonimmersion baptism; to lose the established role of laity in communion; and to ordain active homosexuals.

The Disciples also agreed to allow "ordained ministerial partners" from the UCC to preach and administer sacraments in Disciples churches.

That has Ray worried. He says many in Disciples congregations are upset at the partnering agreement because the UCC ordains homosexuals. "The liberal policies of the United Church of Christ will set standards for ordination in all the partner churches at the lowest common denominator," Ray says. "Unity cannot occur when we are willing to compromise the Word of God." ... 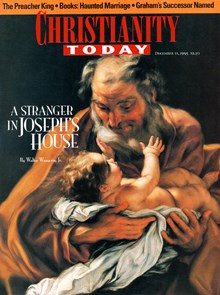 This article is from the December 11, 1995 print issue. Subscribe to continue reading.