CONVERSATIONS: Another Man from Galilee

By Richard A. KauffmanMarch 4, 1996
This article is from the March 4 1996 issue. Subscribers can read all of CT's digital archives.

Elias Chacour is a man of peace. In 1947, Zionist soldiers duped him and his family out of their Galilean homes in the newly formed Israeli state; nevertheless, Chacour has demonstrated a Christlike attitude toward his "enemies" by making his life work the reconciliation of hostile parties. It is no wonder that he has been nominated several times for the Nobel Peace Prize.

Chacour is also a man of action. Committed to restoring justice for the oppressed, he founded Prophet Elias Technological High School and College for students of all religious and ethnic backgrounds. When plans for the high school were frozen in Israeli bureaucracy, Chacour took a detour to get the job done: on a visit to the U.S., he knocked on the door of then Secretary of State Jim Baker. Susan Baker, the secretary's wife, warmly welcomed him into the house but said she couldn't visit for long. She was making preparations for a women's Bible study she was about to host.

When he discovered they were going to study the Sermon on the Mount, Chacour asked Mrs. Baker, "How can you understand that? It wasn't written for the American mentality, but in our language."

She invited Chacour to speak about the passage with her study group, turning a short visit into a two-hour Bible exposition, and a friendship was born. Ultimately, the Bakers personally intervened with the Israeli government, which issued the building permit for Chacour's school.

His life story has been told in "Blood Brothers" (Chosen Books, 1984), which has been translated into 22 languages. CHRISTIANITY TODAY had the chance to speak with Chacour about peace in the Middle East, the future of Palestinian Christians in the region, and how he works for the welfare of both Arabs and Jews.

CONVERSATIONS: Another Man from Galilee

CONVERSATIONS: Another Man from Galilee
expand
hide this 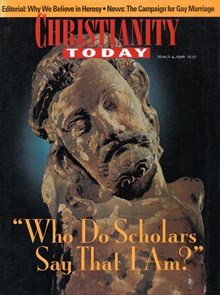 This article is from the March 4, 1996 print issue. Subscribe to continue reading.