Nashville pastor Scotty Smith on the lures, hurdles, and safeguards for Christian artists.
May 20, 1996
This article is from the May 20 1996 issue. Subscribers can read all of CT's digital archives.

Christ Community Church of Franklin, Tennessee, is in a strategic position to influence the contemporary Christian music industry, centered in nearby Nashville. Of the ten-year-old congregation of 3,000, about 20 percent are musicians, songwriters, record company executives, or music publishers. When crisis and controversy have rocked Christian music, Smith has often been called in to help bring resolution. And since his own conversion in 1968--a product of the Jesus movement--Scotty Smith has watched the Christian music industry with concern.

IN THE PAST FEW YEARS, THE CHRISTIAN MUSIC INDUSTRY HAS BEEN ROCKED BY CONTROVERSY OVER MORAL FAILURES. AS A PASTOR WHO HAS TRIED TO BE INVOLVED REDEMPTIVELY, WHAT ARE YOUR OBSERVATIONS?

In the 17 years I've been in Nashville, there have only been a few huge, painful disappointments as intense as the recent Michael English incident, for example. But what encouraged me about that situation was not only that there was concern, but also that there was swift and deliberate action. Neal Joseph, the head of Warner Alliance, immediately wrestled with the question "What do you do if you are the president of a label and you have an artist who falls into adultery--an artist who has just won six Dove Awards, and whose record is climbing right off the charts?" As a man of God and of responsibility, he was faced with a difficult choice. And despite the losses, he stopped distribution of the records.

At the same time, we must acknowledge that one of the curses of contemporary Christian music is "celebrity-ism." This has created an enviornment that feeds the very things against which the Scriptures warn us.

ARE THERE STRUCTURES OF ACCOUNTABILITY IN THE CHURCH THAT ARE PREVENTIVE, NOT JUST REMEDIAL, FOR ...

Shepherding the Stars
expand
hide this 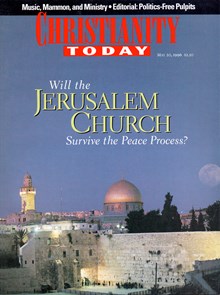