by Kim A. LawtonNovember 11, 1996
This article is from the November 11 1996 issue. Subscribers can read all of CT's digital archives.

Another Protestant pastor has been killed in Iran, the fourth to be murdered since January 1994. According to Iranian Christian groups in the West, Mohammed Bagher Yusefi, a 34-year-old Assemblies of God pastor, was found dead September 28 in northwest Iran. Local authorities discovered Yusefi's body hanged on a tree near his home in the province of Mazandaran.

Yusefi converted to Christianity from Islam a decade ago and was known by the Christian name Ravanbakhsh, which means "soul giver" in Farsi. Under Iran's strict Islamic regime, apostasy or abandoning Islam is a crime punishable by death.

The Great Britain-based Elam Ministries reported that Yusefi had left his house at 6 a.m. to pray in a forest but never returned. Iranian sources told the Colorado Springs-based Iranian Christians International that Yusefi had been detained by local police prior to his death.

"There can hardly be any doubt that [Yusefi] has been martyred because he was a Christian leader from a Muslim background," asserted a statement from Elam Ministries.

Yusefi, who studied theology at the Garden of Sharon Bible School in Karaj, pastored churches in the cities of Sari, Gorgan, and Ghaem-Shahr. According to Iranian Christians International, the three congregations were all underground churches that had been officially closed by the government's Ministry of Islamic Guidance. Friends described Yusefi as a "gifted evangelist" who wrote many indigenous Christian songs. Yusefi is survived by his wife, Akhtar; a daughter, 9; and a son, 7.

Yusefi had ties to several other ministers who were recently murdered in Iran. He was appointed to become a pastor in 1990 by Haik Hovsepian-Mehr, an Assemblies of God superintendent murdered in January 1994 (CT, March 7, ... 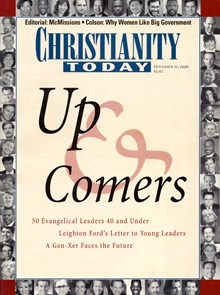 This article is from the November 11, 1996 print issue. Subscribe to continue reading.