New Religious Liberty Bill Unveiled
by Walter Ratliff in Washington, D.C.August 10, 1998
This article is from the August 10 1998 issue. Subscribers can read all of CT's digital archives.

After the Religious Freedom Restoration Act (RFRA) suffered defeat in the Supreme Court last year (CT, Aug. 11, 1997, p. 48), lawmakers scrambled to draft a bill that could withstand a constitutional challenge.

Legislators say the recently introduced Religious Liberty Protection Act (RLPA) could do just that. But some Christian groups say the new bill inappropriately links religious liberty with interstate commerce, expanding federal power. RLPA critics say the bill denigrates religion by associating it with commercial enterprise. The new bill is motivated by recent court cases that religious groups say have eroded the free exercise of religion as spelled out in the Bill of Rights.

Bill advocate Steven McFarland, director of the Center for Law and Religious Freedom, says, "The issue is one of civil liberty, whether religion will be the only place not receiving [legal] protection."

Lawmakers have sought to legislate stronger protections for religious freedom by developing the standard that prohibits state interference with religious practice unless there is a "compelling government interest." Also, governments must act in the least restrictive manner in cases involving religious practice.

More than 80 diverse organizations, from the Christian Coalition to the American Civil Liberties Union, support RLPA, introduced by Sen. Orrin Hatch (R-Utah) and Rep. Charles Canady (R-Fla). But a few key conservative family groups that backed RFRA are not supporting the new bill.

"Our major concern is that the bill offers protection only on the basis of federally funded programs and commercial activity," says Concerned Women for America president Carmen Pate. "It minimizes the importance of religion." 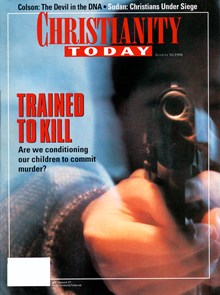 This article is from the August 10, 1998 print issue. Subscribe to continue reading.