Twenty-five years after Roe, and 37 million abortions later, we have to admit we are losing the fight.
Frederica Mathewes-GreenJanuary 12, 1998
This article is from the January 12 1998 issue. Subscribers can read all of CT's digital archives.

January 22 marks a grim anniversary: 25 years since Roe v. Wade legalized abortion. A generation has passed since the first wave of unborn children fell, and the accumulation of each year's toll totals nearly 37 million. During those years one child was aborted for approximately every three born. Their names would fill the Vietnam Veterans' Memorial wall over 700 times.

Abortion has been a disaster, first for the children who died and second for those who survived to grieve a lost child, grandchild, or sibling. It has damaged us all. How can we even measure the spiritual cost levied on a country that pronounces the killing of its own children a celebrated right? It is tempting to avoid thinking about it, and when we do think of it, it is tempting to stew in helpless fury.

Avoidance and fury—neither response has pushed us forward. As a movement, the pro-life cause has stopped. We are stuck, mired, at an impasse. We have had small gains and small losses, but the bottom line is the same: 1.5 million abortions a year. I suggest we use this morbid anniversary as an opportunity to reassess our strategy.

BECOMING LISTENERS
The pro-life movement has succeeded in keeping people uncomfortable with abortion but not in translating discomfort into a firm will to oppose it. That is why I have adopted the unconventional approach of listening more carefully to the objections to our cause.

I have a personal interest in conversation between the opposing sides: I myself have championed both positions. Back in my college days I was your basic bad-tempered, male-bashing, hairy-legged women's libber, actively pro-abortion. Abortion, I believed, was essential to liberation. Women would not be able to enjoy the same success as their male counterparts ... 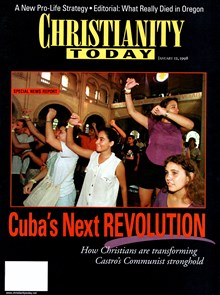 This article is from the January 12, 1998 print issue. Subscribe to continue reading.