February 7, 2000
This article is from the February 7 2000 issue. Subscribers can read all of CT's digital archives.

After Congress passes Jubilee 2000 legislation, campaign rolls onwardFor the world's poorer nations, 2000 may be a Jubilee year after all. Last November, Congress passed legislation to eliminate the debts of poor countries to the United States. The bill encourages countries to use the money to help reduce poverty.

David Beckman, president of the ecumenical lobbying group Bread for the World, calls the legislation a "startling turnaround" for a Congress that virtually ignored the issue a year ago. "This agreement is a major step," Beckman says in a statement. "It will provide real relief for many countries."

About 40 countries—32 located in sub-Saharan Africa—stand to benefit from the legislation. The Jubilee 2000 campaign estimates that the sub-Saharan African nations spend more repaying debts each year than on education or healthcare. Bread for the World estimates that some African governments owe foreign creditors as much as $400 per individual citizen, which is more than an individual's average annual income.

The appropriation is seen as a victory for Jubilee 2000, an international campaign of Protestant and Catholic groups, as well as other human rights and religious organizations. The coalition is based on the principles of a "year of jubilee" as expressed in Leviticus 25, in which slaves are freed and debts are eliminated. Campaign supporters include Pope John Paul II, the Dalai Lama, Desmond Tutu, and pop stars Bono and Stevie Wonder.

Leaders of the seven major industrialized nations meeting in Cologne, ... 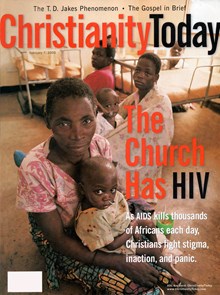 This article is from the February 7, 2000 print issue. Subscribe to continue reading.