2002 was an exciting year for new Christian music, and a good chunk of it came from several talented newcomers. Though we would have loved to include more, ten specific artists handily distinguished themselves from the rest with their impressive national debuts. Many have never released an album prior to 2002, though some have been recording for years independently and others have become their own artist after recording within other bands. Presenting ten new faces we hope will be making music for many years to come.

Click on the artist's image to read our original album review, and use the "Listen" and "Buy" links to visit Musicforce.com.

New Map of the World (Essential)

You might say that Paul Colman Trio (PC3) is Australia's answer to Delirious, in that they're a band that's made a strong impact on the mainstream culture of their homeland. PC3 is the most successful independent artist in Australia's history, which just goes to show how that country (like the UK) is more willing to integrate Christian artists into popular culture. This would make coming to America something of a letdown for some, because of the challenge of being lumped in with the Christian subculture. But it actually fits in with the mentality of PC3, who views America as a larger ministry field. You don't have to speak with Paul for very long before discovering this guy has a humble servant's heart.

As for the music, New Map of the World features some of the most radio-friendly pop-rock we've heard in a long time. This is confirmed by their three hit singles (to date), including their debut smash "Turn," which spent ten weeks at #1. Granted, some of the music is a little simplistic and bland, but bland in a good way (like Mike + the ... 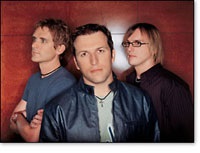