What Conversion Is and Is Not

Hint: It's not just about getting people 'saved.
John G. Stackhouse Jr.February 1, 2003
This article is from the February 2003 issue. Subscribers can read all of CT's digital archives.

As I began to pursue my doctoral degree at a doughty bastion of liberal Christianity, the University of Chicago Divinity School, I met Professor Frederick Sack (not his real name, but the story that follows is true). An expert in the history of Christian thought, he became a favorite of mine. He also, however, became a considerable theological nuisance.

Though he was converted and raised in the evangelical tradition, by the time I met him, he had drifted theologically. He had become an expert on the father of liberal theology, F. D. E. Schleiermacher, and I noticed a portrait of Schleiermacher on his office wall. Professor Sack was delighted to talk about Schleiermacher, whom he invoked as one of his patron saints—inasmuch as Presbyterians have such benefactors, he allowed with a small smile.

But what then was I to make of the portrait that hung beside Schleiermacher's? For there in this den of liberalism was the unmistakable visage of John Calvin. Professor Sack was delighted to talk of Calvin, too, as another subject of his professional research and another patron saint. Indeed, he said, over much of his career he had labored to show the theological threads that connected Calvin and Schleiermacher.

So I began to probe a little further into Professor Sack's convictions. I brought up the classic conflict between Martin Luther and Desiderius Erasmus in the 16th century over the extent to which our salvation depends on God's free gift or on our response of faith and obedience. Luther, of course, despaired of human potential and placed salvation entirely in God's hands. Erasmus believed that authentic Christianity consisted of following the moral example of Christ. So, I asked Professor Sack, whose emphasis was most correct?

What Conversion Is and Is Not

What Conversion Is and Is Not
expand
hide this 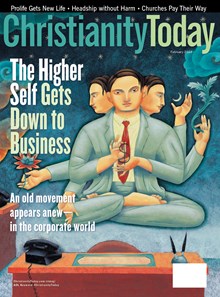 This article is from the February 2003 print issue. Subscribe to continue reading.