With more than 50 new acts introduced to the Christian music scene in 2003, one could call it "The Year of the New Artist." With so many to choose from-including established independent artists and solo acts making their national debut-it wasn't easy to select the 12 best. But we managed to anyway, weighing talent, creativity, original expressions of faith, and quality of album to come up with a list of artists we feel have the strongest potential to affect and entertain for years to come. In chronological order of release dates (dating back to December '02), here are our picks for Best New Christian Artists of 2003.

It typically shows when a band has been cutting its teeth on the independent circuit before going to the majors, and this Toledo, Ohio group is no exception. Sanctus Real packed a wallop with their aggressive-yet-accessible sound beginning with their national introduction on the 2002 Festival Con Dios tour. Since the December 2002 release of Say It Loud, they've been a breath of fresh air to the Christian rock scene, offering power pop that is extremely relevant because of the popularity of Jimmy Eat World and Foo Fighters. The lyrics have a clear Christian slant without sounding trite. But you ain't heard nothing yet if you haven't seen them live—they will rock your face off. Based on their initial reception, the future bodes well for Sanctus Real.
Click here for the original review.
View the artist page. 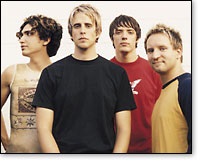