The film version of Hangman's Curse is so different from the Christian teen thriller by Frank Peretti that fans might assume Peretti didn't have much say in its development. The surprise is that Peretti not only serves as a co-producer of the film—he also acts in it.

Of course, it's always easy to criticize films for not being as effective as the books they're based on. But most of the problems with Hangman's Curse seem to be directly related to its screenwriting. The movie is at its best in scenes taken from the book, but the story becomes clumsy and almost incoherent in changed plotlines and added scenes.

Both the book (the first in Peretti's Veritas Project teen series) and the movie follow a family of super-spies who investigate troubling crimes. In this case, they arrive at Rogers High School, where something is leaving popular football players delusional and on the edge of death.

Gossip in the school halls attributes the illnesses to the ghost of a bullied student named Abel Frye, who committed suicide 10 years before the current goings-on. But the ghost appears to be working under the commands of a persecuted Goth kid, Ian Snyder. Is witchcraft really leading to the illnesses? Or is there a rational, Earth-bound answer to the crimes? These are the questions that the Springfield Mom, Dad, and twins Elijah and Elisha are out to answer.

The movie veers from the book in added subplots (like a silly love story for Elisha) and, most puzzlingly, a different explanation of what's going on at Rogers High. The entire premise of the Abel Frye plot is changed, as is the motivation of the criminal mastermind. Peretti's original story told what happens when ridicule pushes someone to the brink—and included a godly solution. But in the movie, an out-of-place revenge plot blurs the message.

In fact, the movie contradicts its own message about being different. It tries to say that everyone—despite social role or hair color—has worth. But what we see is a resolution in which two Goths finally fit in not because of their unique identities but because they conform. They trade in their black makeup for bright-colored T-shirts! Also troubling is that teen groups are horribly stereotyped. The geeks wear glasses and are good in science and math. You know who the jocks are because they wear letter jackets and girls love them—even Elisha. 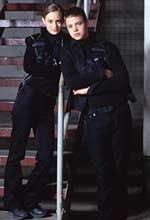 The script also deletes most of the book's overt discussion of weighty issues and a strong conclusion relating to redemption and trust. As a film, Hangman's Curse doesn't offer all that much in terms of moral lessons. The movie does depict realistic teen issues like self-esteem, bullying, suicide, and being different, but doesn't offer many direct lessons or commentary on them. It just shows them.

The movie, unlike the book, fails to mention that the Springfields are Christians assigned to use their moral backgrounds as a type of faith-based initiative against crime. Instead, there's no faith discussion at all until Elisha gets in trouble in the movie's climax and sings "Jesus Loves Me." After that, the movie ends with a family prayer. The trouble is that by only showing two spiritual acts, the faith of the characters doesn't color the events of the movie. Recent mainstream movies like Bruce Almighty, Signs, and Return of the King integrate faith lessons into the story better than this—and provide more teaching moments and illustrations.

There are more problems with the screenwriting. Because the plot is watered down, it's hard to tell exactly what is going on at times. I thought two characters had died, only to see them pop up at the end. This ambiguity is just part of a general sloppiness that takes big leaps, finds easy outs, and uses stilted and laughable "teen" dialogue. 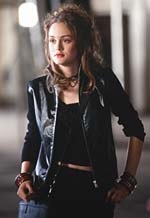 Other than the screenwriting flaws, Hangman's Curse does have many pluses. The production values are very good, benefiting from experienced producers like Ralph Winter (X2: X-Men United). The movie looks and sounds great. The opening credits are legitimately creepy as are a few other parts of the film. But this is not a scary or gruesome movie; it's more X-Files than Scream (although its one semi-scary scene might as well be borrowed from that horror series).

The acting is also strong—most notably that of Jake Richardson (The Dangerous Lives of Altar Boys) as Ian. The only sore spot is, frankly, Peretti. Playing an eccentric professor, Peretti uses every over-acting trick in of the book: fake lisp, goofy glances, and Barney Fife bumbling. He's obviously designed to be comic relief, but feels like Christopher Lloyd's Back to the Future character crammed into an X-Files episode.

In the end, the film does keep viewers' attention, has some shining scenes, and will interest young teens. But it might also leave readers wondering how a pretty good book ended up as a not-so-great movie.

Violence is limited to the hanging of Abel Frye (although the camera pans away and shows only a shadow); three instances of bullying; an undercover cop scene where a character holds a shotgun to someone's face; and a scary scene in which a masked bad guy surprises then chases a girl. There's also an undercover sting operation when a kid gets busted for methylamines, but no drug use is shown. There are also depictions of witchcraft (including pagan symbols and skulls).

1 of 3
Goth kidElijah and Elisha Springfield