"Where's the girl?" The question is asked repeatedly in Spartan, but it also makes for a succinct plot description of the movie.

Val Kilmer stars as Special Ops officer Scott, who begins the film conducting training exercises for new recruits. The would-be agents quickly learn that Scott—esteemed for his skills in espionage, strategy, and combat—is tough and focused … and not around for the camaraderie. One night, before leaving the training grounds, he's suddenly called off assignment for a more pressing mission: A young woman is missing, perhaps kidnapped. It is absolutely imperative that she be found quickly.

Revealing much more would ruin the surprises of Spartan, and thus the enjoyment. Who is this young woman, and why is she so important? What leads are there to follow? Who saw her last and what information do they have to offer? These questions are answered in the first 20 minutes … or are they? With plot twists upon plots twists, the less you know before you see the film, the better. The movie is of the same breed as The General's Daughter and Basic, but much better. Think of it more as a hybrid between episodes of "Law & Order" and "24,"or enjoy it for what it really is: a jigsaw puzzle without the box cover. The edge pieces come together quickly and establish the movie as a crime drama with military and political undertones. How the central pieces fit and what they reveal only becomes clear as the story unfolds.

It's been quite some time since Kilmer has starred in a worthwhile film (depending on your tolerance of anything since 1993's Tombstone)—with the notable exception of 1998's The Prince of Egypt, a Dreamworks animated film with Kilmer as the voice of Moses. In Spartan, Kilmer ... 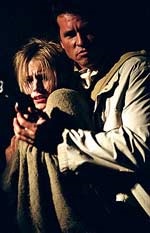