Is there an actor today as delightfully diverse and eccentric with his roles as Johnny Depp? In the last two years alone, he's memorably offered us the charming Captain Jack Sparrow (Pirates of the Caribbean), oddball CIA agent Sands (Once Upon a Time in Mexico), and tormented novelist Mort Rainey (Secret Window). And in 2005, he'll re-team with director Tim Burton for what will surely be a typically whimsical performance as Willy Wonka in a new adaptation of Charlie and the Chocolate Factory.

Depp portrays yet another eccentric in Finding Neverland, though it's also his most well-adjusted character in years. Celebrated Scottish author and playwright J.M. Barrie is best known as the man who wrote Peter Pan, which was in a sense the Harry Potter of the early 1900s. But there's also an emotional and heartfelt tale underlying the creation of this beloved children's play and book. Directed by Marc Forster (Monster's Ball), Finding Neverland is "inspired by true events" and based upon Allan Knee's play The Man That Was Peter Pan, which in turn was inspired by Andrew Birkin's book J.M. Barrie & the Lost Boys. The film was pushed back from late last year to avoid colliding with Universal's 2003 remake of Peter Pan. Miramax's insistence on releasing this in the final two months of the year indicates their high Oscar hopes.

We begin in 1903 at the Duke of York's Theatre in London for the premiere of Little Mary, which puts the audience to sleep and proves a flop for Barrie and his producer, Charles Frohman (Dustin Hoffman, who also played Captain Hook in Steven Spielberg's Hook). The playwright nervously watches his work from the wings of the auditorium, though it's not as if his livelihood completely depends on it. He and his aristocratic ... 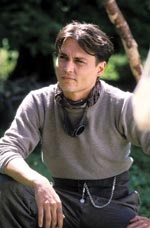