As a former sportswriter, I've walked the sidelines of about 200 high school football games. I've been in locker rooms and weight rooms and press boxes high above the field. I've been to booster club meetings and season-ending award banquets. I've gotten to know dozens of coaches and hundreds of players.

I've seen the game about closely as an "outsider" can see it. I've seen it in schools where football was just a way to pass the time till basketball season. And I've seen it in schools where football is practically a way of life, where 10,000 people regularly turn out for games, where being on the team is sort of a badge of honor and a ticket to big-time status—not just in the halls, but in the community. I've been in places where more people could tell you the name of the high school quarterback than the name of the mayor.

So it was in Florida, where winning was … important. Notice I didn't say everything. Students and coaches felt pressure—much from within, some from the community—to win, but it wasn't everything.

That's apparently not the case at football-mad Permian High School in Odessa, Texas—at least according to Friday Night Lights, the latest film from Oscar-winning producer Brian Glazer. At Permian, winning is everything, and this movie portrays that loud and clear. The film, directed by Peter Berg, is based on the critically acclaimed book of the same title by Pulitzer Prize-winning author H. G. Bissinger. The book and film chronicle the 1988 season at Permian, one of the nation's top high school football programs.

Let me begin by saying that this is one of the best—if not the best—sports movies I've ever seen. It's extremely well done on all fronts—emotive acting, ... 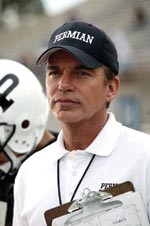