Cracking Down on Conversions

Buddhist radicals push tough new laws.
Manpreet SinghSeptember 1, 2004
This article is from the September 2004 issue. Subscribers can read all of CT's digital archives.

Christians are fighting attempts by Buddhist nationalists to stem the growth of Christianity. A political party for Buddhist monks, Jathika Hela Urumaya (JHU), introduced the "Prohibition of Forcible Conversions of Religions Bill" in Parliament on July 21. The bill bans religious conversions obtained by force or fraud. Christians oppose unethical conversions but worry opponents would use the bill to target their work. Sources say the court is expected to release its ruling on Aug. 12.

"A lot of prayer is going on," a senior church leader told CT. "The proposed law is very strong. Christians will have a very difficult time."

The Ministry of Buddhist Affairs is expected to introduce an even stronger bill, the "Act of Safeguarding Religious Freedom." The draft says, "No person shall convert or attempt to convert or aid or abet acts of conversion of another to a different religion."

Both bills provide for heavy fines and imprisonment for violators. The National Christian Evangelical Alliance of Sri Lanka (NCEASL) is challenging the first bill in the national supreme court.

Christians long have feared the introduction of anti-conversion laws. They see the entry in April of Buddhist monks into Parliament as a sign of growing intolerance of religious minorities. Evangelical Christianity is growing by more than 11 percent a year, according to Operation World. Catholic groups are growing about 1 percent annually.

In response to the growth, Christians have reported more than 50 violent attacks in the last six months. Radicals forced 146 Christian places of worship ...

Cracking Down on Conversions

Cracking Down on Conversions
expand
hide this 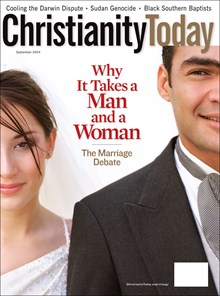 This article is from the September 2004 print issue. Subscribe to continue reading.