On one level, Resident Evil: Apocalypse has little in common with its predecessor. Where the first film followed a team of para-military professionals through a brightly-lit underground lab filled with holograms and lethal laser beams, its sequel takes place largely outdoors and late at night, in a city laid waste by a virus that has turned most of its citizens into staggering zombies; and this time, the heroes are a ragtag bunch that include a journalist, a child, a handful of cops abandoned by their superiors, and, uh, whatever that woman played by Milla Jovovich is. Okay, so the two films have at least one thing in common.

But even Alice, the Jovovich character, seems like a brand new creation, and in some ways, she might very well be. The last time we saw her, she had just woken up in a lab and stumbled outside to discover that the streets and buildings were utterly empty, except for all the wrecked vehicles. The new film, which takes place in a city so overcrowded with the living dead that none of its streets stay empty for long, suggests early on that Alice did not wake up by accident, but was "activated" by the Umbrella Corporation, a typically evil conglomerate that specializes in "viral weaponry" and for which Alice once worked. What's more, subtle changes in Alice's body suggest she may not be fully human any more.

Then again, none of these characters are all that human, are they? Resident Evil is based on a series of video games, and it shows in such details as the impossibly tight and skimpy clothes that police officer Jill Valentine (Helen of Troy's Sienna Guillory) wears underneath her holsters, or the way that special-ops soldier Carlos Olivera (The Mummy's Oded Fehr) jumps into the fray from a helicopter with a gun in either hand, scoring perfect bulls-eyes on the way down, or the ridiculously large number of weapons that Alice lugs around while leaping effortlessly from fireballs and moving motorcycles. And then there is a tall, remote-controlled, rocket-launcher-packing beast of a thing called Nemesis (Matthew G. Taylor), which used to be a friend of Alice's, until the Corporation gave him the ugliest makeover ever. 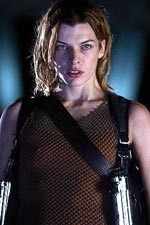 Yikes, is that a whiff of drama wafting into the oh-so-explosive proceedings? Will Alice and Nemesis be forced to fight to the death against their will? Will our souls be stirred as the monster's computer-generated eye sheds a digital tear? Not to worry, any character development is purely perfunctory, like the briefing sessions between levels on any video game. Ditto the subplot in which Dr. Charles Ashford (Jared Harris), the scientist who invented the virus that caused all this trouble, lurks outside the quarantined city and hacks into its security system to locate non-zombies—such as Alice, Valentine and Olivera—who can find and rescue his daughter Angela (Evelyn's Sophie Vavasseur). The point of all this, of course, is not the bond between father and child, but the fact that our heroes need some sort of objective, otherwise they're just wandering around with guns in their hands.

Alas, simply giving them a goal to achieve doesn't make the story any more interesting, or their personalities any less blah. The film was written by Paul W.S. Anderson, who directed the previous film before turning his attention to Alien vs. Predator, and like those other films, Apocalypse shows little interest in making the fight scenes matter. Instead, we are meant to cheer with characters like the guy who sits on a roof and picks off zombies one by one, video-game style, while gleefully hooting, "I've got the power!" (Okay, I admit, I laughed at that one. And as a Canadian who lives west of the Great Lakes, it was immensely satisfying to see Toronto City Hall—which doubles as the Corporation's lab—get nuked.)

The film also trucks in some tired old stereotypes, such as the African-American hanger-on (Mike Epps) who seems to exist just to provide some profanity-laden comic relief. Then there is the prolonged fight sequence within a church. One tries not to be overly sensitive about this sort of thing, and I suppose it wouldn't be so bad if the filmmakers had kept themselves to gunshots and explosions in the sanctuary, while the odd motorbike came to the rescue by flying in through the stained-glass windows, but crushing a monster under a crucifix does begin to cross a line, in my book. And that's before Valentine stumbles across the priest who has been feeding human flesh to his zombified sister. "You're sick!" Valentine cries—and so, once again, the token Christian is held up for special contempt.

Apocalypse is directed by Alexander Witt, who makes his debut at the helm after a decade or two of second-unit work, and he certainly knows how to make an audience jump. The problem is, he tries to jolt us out of our seats far too often; you can only be caught off-guard by loud noises and sudden shocks so often before you get somewhat used to them, or indeed, before you begin to expect them. For a brand-new zombie movie that is more emotionally involving and a heck of a lot funnier, you'd be better off watching the British import Shaun of the Dead; it proves that just because a film is about the undead, that doesn't mean the film itself has to feel like it was made by the undead or for the undead.

Resident Evil: Apocalypse is rated R for "non-stop violence, language and some nudity." The film is full of violence of all sorts—guns, rockets,exploding vehicles, zombies chewing on human flesh, people getting impaled by flying metal objects, a nuclear explosion, etc.—and there is fairly frequent profanity. The walking dead include a couple of topless strippers or hookers, and Alice wakes up practically naked in a lab on two occasions. The fight sequence set inside a church could also be interpreted as a form of gratuitous desecration.

Paul W.S. Anderson, director of this year's much-maligned sci-fi fiasco Alien Vs. Predator, was responsible for the first big screen adaptation of the video game Resident Evil. Milla Jovovich and Michelle Rodriguez starred in the flick, and Jovovich is back now for a sequel, written by Anderson but directed by newcomer Alexander Witt.

Some moviegoers are actually having a good time chuckling at the sheer lunacy of its indulgent, illogical, hyperviolent spectacle. But religious press film critics stopped just short of calling the film a sign of the pending apocalypse.

Bob Smithouser (Plugged In) calls it "a dumb, obnoxious horror film. Hunting for subtext amongst the explicit content would be like fishing a penny out of a public toilet. What makes matters worse, the ending leaves things wide open for yet another sequel."

Peter T. Chattaway (Christianity Today Movies) recommends you wait for a different Zombie movie: "For a brand-new zombie movie that is more emotionally involving and a heck of a lot funnier, you'd be better off watching the British import Shaun of the Dead; it proves that just because a film is about the undead, that doesn't mean the film itself has to feel like it was made by the undead or for the undead."

David DiCerto (Catholic News Service) says this is an "apocalyptically preposterous and unremittingly violent sequel. This Dawn of the Dead clone is devoid of anything remotely resembling narrative, character development or redeeming moral value. Instead, Witt opts for nonstop, lavishly violent action sequences—including one in a church—which ultimately go nowhere, and are as tedious as they are gratuitous."

Moviegoers, however, reveled in the inanity and made the film a box office champion. Who can blame the movie business for turning out films like this when ticket-buyers make it clear that this is what they really want to see?

1 of 3
A motorcycle crashing through stained glass&mdash;now there's something you don't see every dayMilla Jovovich in kick-butt modeJill Valentine (Sienna Guillory), getting fired up